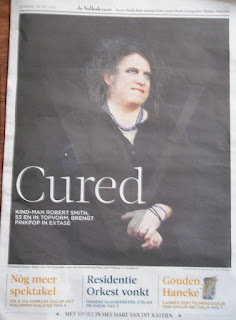 "In today's paper was a huuuuge full page photo of Robert + a brilliant article. (The V in the picture is 'cause the paper is called De Volkskrant)"
Here's the translation of the article:
"Linkin Park was a pretty good headliner on the second day, blablabla, but not the singalong that made Pinkpop glow in the atmospheric evening hours.
The Cure however did do that on the opening night. The band with ever charming child-man Robert Smith has played the bigger audiences for the last years in his new outfit, wíth bass player Simon Gallup, but at Pinkpop the group rose above itself as a festival band.
They have a rich oeuvre: the band started in the 80's as a new wave band, played Pinkpop as so in 1986, but kept renewing itself and can now go into the pop encyclopedia as a creator of timeless pop hits such as A Forest, Close To Me, The Walk, The Lovecats, Pictures Of You.
Magic songs, that combine happiness with big somberness that were performed masterfully in a show lasting over 2 hours at Pinkpop. Moving en inescapable, even when Smith played his acoustic guitar. Robert Smith, vocally and also seeable spiritual in top shape, embraced Pinkpop and brought extraverse. He put on a show like a church service, and you didn't even have to be a believer." (Thanks Elly)
Posted by Craig at 3:21 PM