Photo from 'In Between Days' press release 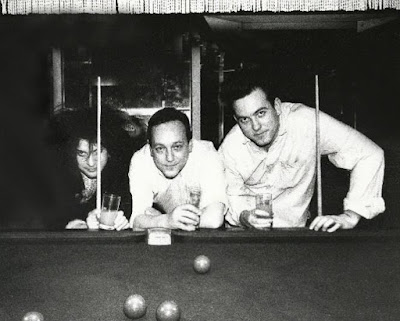 If you're interested in the Super Deluxe edition, I'm told half of the edition is already sold out, so order it as soon as you can.
Posted by Craig at 1:31 PM 0 comments


That time I was interviewed for the Official Ferrari Magazine by Nick Mason of Pink Floyd hahahah https://t.co/FaqDYfY67T
— Roger O'Donnell (@RogerODonnell) May 3, 2016


Interview is only available to Ferrari magazine subscribers.

Andy MacFarlane on touring with The Cure

HAVING established themselves as a staple part of Scotland’s thriving music scene with four well-received albums, The Twilight Sad are spending much of 2016 spreading their appeal around the globe. It’s not often you get to go on tour with your heroes after all; the Glasgow band were living the dreams of many when they were asked to join The Cure on the road earlier this year. With Robert Smith known to be a huge fan, even releasing a cover of their track ‘There’s a Girl in the Corner’, the trio have now completed a mammoth tour of the States which saw them play up and down the country, including world-famous venues like Madison Square Gardens and the Hollywood Bowl.

With the European leg set to kick off in October, the band now have some time on their hands and will make their live return on home soil with an appearance at Electric Fields festival next week. We caught up with Andy from the band to hear about his experience with The Cure and the upcoming festival.

“The tour was beyond amazing, very surreal. We’ve played some big gigs but never a full tour on that scale before.’ And with the European leg coming up, there’s still some massive shows ahead, ’We’re looking forward to all of it. Europe’s great to tour anyway, but getting to do it in these venues and see The Cure every night will be pretty amazing.”

Especially when they’ve been such a huge influence on the Sad: “I’ve always listened to some era of The Cure for as long as I can remember, so elements of their music will always overlap with ours in one way or another.”

Of course, with the post-punk legends having such a massive global appeal, the trio have found themselves in front of huge crowds every night, with many people hearing them for the first time. However, this hasn’t fazed them: “I actually look at every gig the same. To me, there’s no difference playing somewhere like King Tut’s, the Barrowlands, or an in-store in Mono to playing somewhere like Madison Square Garden or the Hollywood Bowl.

“It really doesn’t matter what the venue is or who the crowd are, you always need to appreciate that people have spent their money to get there, and if you overthink it, you can very quickly build up apprehensions and start to trip yourself up.”

Read the rest at Tenement TV.

And then go listen to Andy's reworking of 'Man is Not a Bird' by Haze.
Posted by Craig at 12:09 PM 6 comments

The Beatles, The Cure, The Who and Bray

What do Bray and three of the biggest bands of all time have in common?
.....
Around this time, Robert Smith started spending a lot of time in Ireland, especially on the South Dublin and North Wicklow coasts.“I came over in 1986 for a few weeks’ break and ended up spending a year-and-a-half there,” he told Stuart Clark from Hot Press. “I rented a cottage just outside Dalkey – it’s beautiful down there. I used to walk back along the DART line, that’s the only way I could find my way around. I went to Ireland on holiday a lot when I was very young because of my grandparents’ family connections. I was reconnecting with that.”

Read the rest at Swench.net. (Thanks @alex_meehan)
Posted by Craig at 11:15 AM 1 comments

Congratulations to Eden and Nancy!


Wishing you a long life together full of love, laughter and metal!
Posted by Craig at 11:10 AM 2 comments

An Evening with Lol in Bath

In his powerful new memoir, CURED, founding member of The Cure Lol Tolhurst reveals the story of a timeless band and a life truly lived. The Cure‘s journey to worldwide success is one of not only of the great highs and lows of the lifelong friendship between Tolhurst and frontman Robert Smith, but also of love, pain, forgiveness and, ultimately, redemption on a beach in Hawaii.

As The Cure’s drummer, Lol toured the globe many times over, supporting the ground-breaking albums Three Imaginary Boys, Seventeen Seconds, Faith and Pornography. He took on keyboard duties in the mid-eighties until his departure from the band in 1989, at the time of their masterwork Disintegration. More recently, 2011 saw a momentous reunion tour with his former bandmates and Lol performing with The Cure again for the first time in over twenty years.

“This is a record of the things that have kept me awake at 4 a.m., the precious flowers of the past blooming in the dark corners of memory. I have tried my best to capture whatever that light shone on. I hope it illuminates events for you as much as it has for me” Lol Tolhurst.
Posted by Craig at 9:33 PM 3 comments

An Evening with Lol in Manchester

Lol Tolhurst, founding member of legends The Cure joins us in store to celebrate the launch of his memoir, Cured: The Tale of Two Imaginary Boys.

Lol will be chatting with us about the book, as well as his time in the music scene, before taking your questions and signing your books.

Tickets are £6 and can be purchased here.
Posted by Craig at 3:34 PM 2 comments