The sallow goths who would become the Cure might not seem like the sort of blokes to name themselves for a large phallic monument, but that's just what they did when the then–middle school students got together in the early Seventies. Robert Smith, pre–mop top and raccoon eyes, was a background figure in the Obelisk, playing piano, but he soon moved up front and took charge of the group's moniker. After a few more lineup changes and a couple transitory names, Malice and Easy Cure (the latter of which the singer found too "hippyish"), Smith dubbed them the Cure. For more than a few lovelorn sad sacks, they would live up to billing. (Thanks Perfect.Murder)
Posted by Craig at 12:17 PM 7 comments

Yes, it's yet another Friday cover, but this one's different, and I think it's wonderful! (Thanks Ben)
Posted by Craig at 12:07 PM 15 comments

WFPK 91.9 in Louisville will be interviewing Reeves today from 3- 4 pm eastern, ahead of his show at Time & Space tonight. You can listen online here.

And here's an interview with The Exponent.
Posted by Craig at 11:44 AM 0 comments

Reeves & His Imaginary Friends US tour 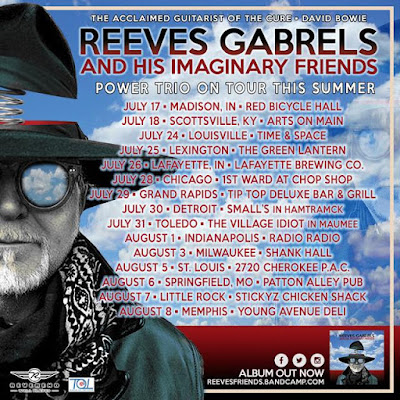 Get out to the shows and support Reeves!

From A.V. Club: "Though some viewers may find themselves playing spot-the-author with the patchy script (e.g., a fight scene gag involving The Cure’s Disintegration, which smacks of Wright), it still makes for an enjoyable, intermittently inspired effects-driven comedy and a welcome antidote to the over-burdened world-saving that seems to define big-screen superhero stories.:

Anyone seen it yet? Anyone going tonight? If so can you give me some details about the scene? (Thanks Kimberly)

Update: And here it is! Thanks to JakeBradProductions.

"The protagonist of the film, Ant-Man, was fighting with the antagonist, Yellowjacket, in a briefcase on a plane. The briefcase fell out of the plane, and as the contents of the briefcase were being tossed around, Ant-Man accidentally activates Siri on an iPhone, and Yellowjacket yells, "I am going to disintegrate you!" as Siri resonds "Playing Disintegration by The Cure." "Plainsong" begins playing as the two proceed to fight. Really caught me and my dad off-guard as Marvel and Cure fans. "

Reed also would’ve been upset if Marvel couldn’t secure the rights for a song from The Cure’s finest album, Disintegration. Ant-Man may be the first movie in history to have a song by The Cure playing during one of its big set pieces. At one point Ant-Man and Yellow Jacket fight in a briefcase to the amazing sound of ‘Plainsong’. “In the briefcase battle, we knew we wanted to have an iPhone joke,” Reed says. “We had all these different versions of jokes, like, Yellow Jacket saying, ‘You’re going to end up dead!’ and then you’d hear ‘Searching for the nearest Panera Bread.’ There were some funny jokes and some not-so-funny jokes, but, at the end of the day, they were just jokes. What if he activated the music feature? What would it be? I’m a massive Cure fan. We came up with a bunch of things, but we thought we could find a joke for ‘disintegration.’ The first song on Disinigration, which is the second CD I ever bought, was ‘Plainsong’. It’s such an epic song that it transcended the joke — scoring this whole battle in a briefcase. There was this weird, cold wave goth vibe, changing the character of that action scene. You have all these action scenes you want to have a different flavor. Then it became a question of, ‘Will [The Cure frontman] Robert Smith let us use his music?’ He ended up loving it, so he did.” (Thanks fmjews)
Posted by Craig at 6:48 AM 10 comments 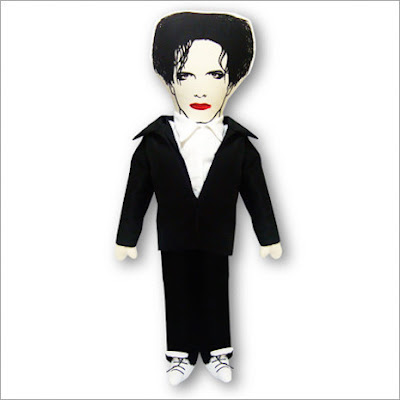 "The plush renditions you are about to see of some of the most influential cultural icons in history were created by Sao Paulo, Brazil based illustrator and toy designer, Josmar Madureira. His work was recently featured in a fantastic looking book, Toy Land by Louis Bou which boasts more than a half of a million examples of toy art from around the world created in various mediums such as vinyl, metal, fabric and of course, plush."

If you want to buy one, though I seriously doubt these are officially licensed, here you go. (Thanks @waswasere)
Posted by Craig at 1:42 PM 5 comments

"...and now from Natalie a look behind the scenes at the 99X/10 concert rehearsals with Hannah and Erin and Quartet Voluté. Im editing the full shows and a 30 minute interview from the evening and hope to post by the end of the week."
Posted by Craig at 1:54 PM 1 comments