Setlist: Plainsong, Pictures of You, Lullaby, High, The End of the World, Lovesong, Just Like Heaven, From the Edge of the Deep Green Sea, Fascination Street, The Walk, Mint Car, Friday I'm In Love, Doing the Unstuck, Trust, Want, The Hungry Ghost, Wrong Number, One Hundred Years, Disintegration

Encore: The Lovecats, The Caterpillar, Close To Me, Hot Hot Hot, Let's Go To Bed, Why Can't I Be You?, Boys Don't Cry.

Thanks so much to Olivier (@iapdtweet), @TigerBuckeye, and Scott for the setlist reports tonight!

Video clips: Roger playing a bit of Trust / Pictures of You - High - End of the World - Lovesong

Brit Face Off: Depeche Mode vs. the Cure 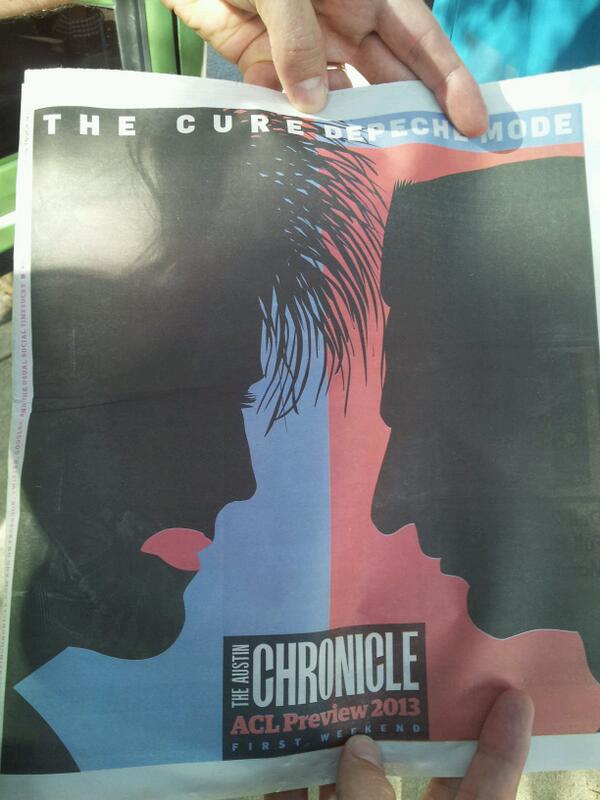 The Austin Chronicle matches up Depeche Mode and The Cure in an epic ACL Festival battle. Silly, yet fun article, but one huge mistake....
"Song they (The Cure) shouldn't play: "Give Me It"."
The writer completely misspelled Wrong Number. ;)
(Thanks Dana and @kafdancer)

Posted by Eden Gallup on Instagram. Follow him @edvendetta for more behind the scenes photos from the shows.
Posted by Craig at 1:06 PM 2 comments

If you're going to the shows in Austin and/or Monterrey, and wouldn't mind helping me with the live setlist & reports (via Twitter, email, WhatsApp, Facebook, etc.), please let me know. Thanks!
Posted by Craig at 8:33 AM 6 comments

From the El Paso Times:

It would seem El Paso has found The Cure.
Or maybe that's the other way around.

It's been 37 years since Robert Smith -- he of the teased raven's hair, smudged red lipstick and black eye makeup -- formed the gloomy, doomy British band; 34 since their first album came out; and 30 since the dancey "The Walk" accelerated a string of hit singles ("Just Like Heaven," "Lovesong," "Boys Don't Cry") and albums ("Pornography," "Kiss Me, Kiss Me, Kiss Me") that made them the darlings of goth rock.

But the iconic British band has never played in El Paso before.

Fans from as far away as southern Mexico no doubt will be in love Thursday when the venerable group brings its "Group Circle Tour" to UTEP's Don Haskins Center at 8 p.m.

By Sept 9, promoters had begun selling restricted-view seating. More tickets could be released by the time the band hits the stage, according to Jorge Vazquez, director of UTEP's Special Events office.

"I think The Cure is one of those what you'd now call classic acts that everybody wants to see," Vazquez said.

"There are certain names ... that trigger that, 'Oh my God, this is going to be huge' kind of thing. This is definitely one of those."

Ultimate Classic Rock lists The Cure's cover of 'Purple Haze' as one of their Terrible Classic Rock Covers.
Posted by Craig at 8:01 AM 12 comments

Ticketmaster says The Cure are playing Voodoo Experience 2013, and I believe them. :) After 13 long years, The Cure finally returns to New Orleans! Welcome back! Thank you so much!
And just a reminder that this is VOODOO...in New Orleans...on Halloween weekend (though I dispute this), so a dark set? Please? I mean if The Cure are playing Voodoo they HAVE to play 'Siamese Twins', right? "Voodoo smile, Siamese Twins". Come on, Robert! :)

Update: CoS has contacted Voodoo and they have confirmed it! And yes, it is now official!

Update (Oct. 1st, 2013): "A limited number" of single day tickets are now on sale. $87 + TM fees. Also, as most of you know, How To Destroy Angels have unfortunately had to cancel their appearance at Voodoo and Mountain Oasis.

Slicing Up Eyeballs' ongoing Best of the 80s project continues with their Best Album of 1987 poll, and 'Kiss Me, Kiss Me, Kiss Me' is one of the options.