So what has Robert been up to lately?

Well, if you believe "the fucking internet', he's been buying guitars and writing lyrics.

Jun 21, 2017 (5:30pm) - San Francisco
VIP Evening with Lol Tolhurst
This event is limited to 40 people and will include a spoken word performance, question and answer session and the chance to get a photo or an autograph. Address will be provided to ticket holders 24 hours prior to the event. Buy tickets here.

Jun 21, 2017 (8:30pm) - San Francisco
VIP Evening with Lol Tolhurst (late)
This event is limited to 40 people and will include a spoken word performance, question and answer session and the chance to get a photo or an autograph. Address will be provided to ticket holders 24 hours prior to the event. Buy tickets here.
Posted by Craig at 5:20 PM

"It would have been at some point in late 1987, my senior year of high school, and it would have been in one of the two English literature courses I was taking that year. (Because I sure as hell didn’t want to do phys ed classes after I didn’t have to any more.) I had heard this song 'Just Like Heaven' on the radio and was randomly enthusing about it, because it was really good and all. I remember my classmate Susan Orozco - who regularly preferred to dress all in black, like a small coterie of people at our high school - saying in response “Yeah, but I think they sold out.” My reaction was essentially confusion - the class was about to start and I just wasn’t sure what to make of it. What was there to sell out from? And if it sounded this good, why complain?

A couple of years back I celebrated The Head On The Door’s 30th anniversary for tQ and so here I am again a couple of years later with the next album along the way. So I won’t try to add anything further to the potted band history I already gave in that feature, except to note an extension. After that album’s well-deserved success in the UK and elsewhere (especially on incipient alternative radio in the US) the temporarily stable lineup of Robert Smith, Simon Gallup, Lol Tolhurst, Porl Thompson and Boris Williams, spent 1986 dealing with retrospection colliding with the present. The Standing On The Beach singles collection - easily one of the best of its era, hands down, a perfect illustration of just how Smith and company’s pop instincts had been on since the start - served as both a good reason to hit the road some more and create a great concert film in The Cure In Orange while they were at it. "

Read the rest at The Quietus.
Posted by Craig at 4:35 PM


Mac explained the creative process behind bringing the production to life, and how they dazzled the expectations of die-hard Cure fans: “It’s important to note that Robert Smith was very hands-on with the design for the show; he’s been as much a member of our creative team as he has a band member. When Robert and I first discussed the design, we wanted a very simple look, where the set is the lighting rig and it’s a very clean, uncluttered stage. We started off with the idea for a curved screen at the back of the stage, added a curved riser and pulled the ends of the truss back to extenuate the curved look. The different lighting looks we used was kept simple, but precise and well-executed, for happy songs we used bright colourful lighting, and for moody songs, we adjusted the lighting accordingly.”

PRG XL’s event services co-ordinator, Ben Hornshaw performed the role of lighting programmer, and worked closely with Mac and Robert on all the live shows and in the pre-production stage: “We’re confident the fans really enjoyed the show, there was an awful lot of lighting and video technology on stage. The band played a fan-based show which lasted for just under three hours made up not only of hits, but also album tracks and lesser known B sides.”
Read more »
Posted by Craig at 4:01 PM

"While punk did indeed make a lasting impression on those who were touched by it, there were enough influences coming through from the 60s to also make a difference in the early 80s. The passage of time has served to rub out the impact that psychedelics made on the music of the post-punk era, but LSD was still popular and a strange legislative loophole meant that magic mushrooms were legal on the proviso that they weren't prepared in any way. In theory, picking and eating them at source wouldn't be tarnished by the threat of legal sanction.

It was in this environment, with the real world issues of the threat of nuclear war and harsh economic conditions also looming, that The Cure - then a trio of guitarist and vocalist Robert Smith, bassist Simon Gallup and drummer Lol Tolhurst - released their fourth album, Pornography. Dark, claustrophobic and densely packed, it unwittingly set a benchmark for subsequent generations while adjusting the vernacular for psychedelic music. Made under the influence of LSD and alcohol and in tense circumstances, it not only concluded a run of albums that had seen the band's sound evolve over a period of four years, it would also destroy that incarnation of the group."

Read the rest at The Quietus.

From Michael Ciravolo on Facebook, Simon & Eden working on a track for Michael's album. https://t.co/AzzkroUXFg pic.twitter.com/4oukVOXIaH

Roger at the Spanish Grand Prix


Roger O'Donnell, keyboard player with The Cure, takes us for a spin in his Dino 246 GT - https://t.co/DahhVniKYp

Lol is working on a new project

From @RealLondonMay on Facebook. Looks like @LolTolhurst has a new project, The AntiMatter Network, coming soon. pic.twitter.com/10YWkvalzA

New project in the works from @LolTolhurst (The Cure) and @RealLondonMay (Samhain/Danzig). Thanks to them for inviting me to be part of it! pic.twitter.com/P9h24pYcuN

Pearl at the Malibu Guitar Festival

And you can see a bunch of photos from the night here.
Posted by Craig at 1:55 PM

Revisit 15 Classic Tracks By The Cure

"Robert Smith has been making music with The Cure since the goth-rock band formed in 1976 – and in 41 years' time, his group has given us quite an extensive body of work (including 13 albums, 4 EPs and numerous compilations). His classic songs and his eccentric image have captivated audiences on both sides of the Atlantic, making The Cure one of the most internationally successful acts in alternative rock history.

Over the course of his illustrious four-decade career, Smith has performed with his idol David Bowie, appeared as a superhero version of himself in an episode of South Park, and reportedly even inspired the look of Tim Burton’s 1990 cult classic Edward Scissorhands. His favorite cover of a Cure song is Dinosaur Jr.’s “Just Like Heaven."

Read the rest at Billboard.

7 Things You Didn't Know About 'Friday I'm in Love'

The darkest funeral dirge sounds almost peppy compared to the goth apocalypse of the Cure's Disintegration, a 1989 album completed under such fraught circumstances that frontman Robert Smith seriously wondered if it would be the band's last. When they managed to endure following a series of personnel changes, Smith and Co. tackled their next project with a new, cautiously optimistic outlook.

Released in 1992, Wish would be the Cure's commercial apex, a diverse collection of instantly accessible songs that combined Smith's talent for creating dense lyrical thickets with some of the most tuneful melodies the group ever recorded. Though a few clouds appear on the horizon (see the heartbreaking ballad "Apart" and the epic drama of "From the Edge of the Deep Green Sea"), the album flaunts an upbeat tone. "High" is a musical sugar rush, and "Doing the Unstuck" features the shockingly un-Cure-like lines, "Kick out the gloom!/Kick out the blues!/Tear out the pages with all the bad news!"

Chief among the album's highlights is "Friday I'm in Love," an unrepentantly catchy pop song dripping with exuberance. It became one of the Cure's highest charters, and also one of the most identifiable singles of their 40-year-plus career.

In spite of the album's comparatively sunny sound, Smith balked at any suggestions that he was (gasp!) happy. "Say 'happier.' I'm still miserable overall," he insisted to Spin just after Wish's release. "I think, words-wise, there are only two songs on the new album that are miserable, so I guess I can't be that miserable at the moment – but I am, really. It's that same core of despair that never goes away." Perhaps it's only fitting that the Cure's next album would be titled Wild Mood Swings.

The Cure's most pop-friendly LP to date was also among their biggest sellers, debuting at Number Two on the Billboard charts. Today Wish remains a cornerstone of the band's catalogue and one of their most beloved works. In honor of its 25th anniversary, we look at some fascinating facts about the album's smash single, "Friday I'm in Love."

Read the rest at Rolling Stone.
Posted by Craig at 1:45 PM

Why Can’t I Be A Cure Fan Like You?

"Gwen Ihnat: The Cure didn’t exactly make a U-turn in 1987 with Kiss Me, Kiss Me, Kiss Me, but it was a hell of a reroute. The iconically mopey band, led by head goth/grump Robert Smith, all of a sudden had a cheerful horn section in “Why Can’t I Be You?” that threaded throughout the double album. And while its poppiness—and the smash success of “Just Like Heaven”—helped Kiss Me become The Cure’s first Top 40 record in the U.S., it also became the first Cure record I never bought.

I was probably slightly too cheerful to be too much of a goth. In my younger years, I preferred buoyant outfits like Simple Minds or lively pop like Squeeze. But whenever I was mad at my parents, my sibling, or the world—like teens before and after me—The Cure was the perfect solace. I tried albums like Pornography and The Top, but my go-to was Standing On A Beach, a compilation of The Cure’s first 13 U.K. singles. Dark sonic journeys like “The Walk,” “The Hanging Garden,” and especially “Charlotte Sometimes” made for ideal wallowing music. I could even appreciate when the band perked up a little bit, like in “Let’s Go To Bed” and the cute “The Love Cats.” And I stayed on board through The Head On The Door, mostly because of “In Between Days.”

About the LatAm tour footage...

To be clear, the South Amercan footage will probably be included In a bigger protect, the gods willing. Stop bugging me!!! 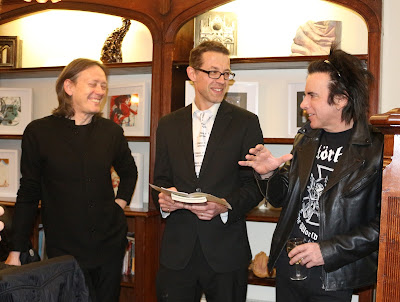 Roger and Simon were at the school for a discussion on the Poetry of Pop.
Posted by Craig at 1:25 PM