Levinhurst - so its on: Peru/Chile/Argentina/Brazil! all before Easter next! See you all (again).
Posted by Craig at 10:37 AM 2 comments

Update 2 (from Lol): "Just realized looking thru my recent emails from Robert he tells me that he's working on the Cure at the BBC and mixed up remaster..oops! Not Cure In Orange as previously reported! But anyway the dvd of it should be out soon enough...."

Update: Michael hopes to post the audio from the show soon, but until then, here are a few highlights - Lol said that Robert told him that work continues on The Cure @ the BBC box set and that it should be out next year. Same goes for the deuxe edition of Mixed Up. He also emailed Robert recently about the possibility of playing some shows together next year for the 30th anniversary of 'Faith', with the original lineup, and says the ball is now in Robert's court.

A reminder about Lol being on Part Time Punks today: "Lol Tolhurst will be on my Part Time Punks radio show today from 3-6pm P.S.T. on KXLU 88.9FM in Los Angeles. He promises to bring rare tracks by The Cure, Levinhurst, The Presence as well as some weird and rare tracks from his extensive collection of electronic music (which dates back to 1930)." (Thanks Michael)
Posted by Craig at 10:17 AM 38 comments

The Cure tribute band, TheXplodingboys, will be playing Thursday, August 19th at Dante's in Portland, OR. They'll be playing all of 'Faith', plus lots of other songs.
(Thanks April & Suzy)
Posted by Craig at 10:00 AM 5 comments

Cure on Madness of the 80s 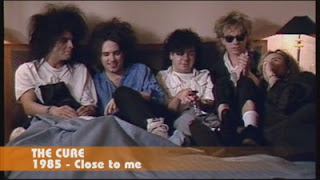 "Yesterday on French TV channel France 3 there was a program called "the madness of the 80's", a collection of the most memorable events in music/fashion/politics etc.. and they showed about 8 seconds of The Cure. First they were lying on a bed doing a kind of a capella version of Close to Me with Simon singing the bass line, Boris clapping his hands and Porl singing the keyboard part. Then they showed a few seconds of The Cure on stage with Bananarama."(Thanks Sylvain)
Posted by Craig at 4:28 PM 12 comments

Update: Digital Download available from 7 Digital and Amazon. Also, Ideal Copy will be carrying the 7" single. (Thanks Brad & Chris)

65dos - November Euro/UK tour announced. All dates here. Click the venue to buy tickets.
Also, 'Come To Me' (their recent track with Robert Smith), paired with 'Weak4', will be released as a double a-side single on Aug. 16th. It will be available on 7" vinyl and Digital Download. The DD will include the b-side, 'Memorydress'. More info here.