From Phillyburbs.com: "It's hard to make everyone happy. We could if we played three-hour sets like Robert Smith (of the Cure) plays. But the difference is that Robert just stands there and sings and plays guitar. Dave gives everything he has and you can't do that and play for three hours. Dave is all over the stage. He puts everything out there until he's dead."

Amanda Palmer - Inbetween Days. (Thanks Jeff)
Black Sugar Transmission - Mouth To Mouth. (Thanks Andee)
Posted by Craig at 4:09 AM 5 comments 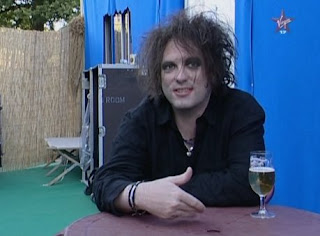 "French TV channel Virgin 17 is going to show a documentary called "Sympathy for the Brit Rock" on Thursday July 30th at 6:05 PM (Paris Time). They mention that this film has interviews with Radiohead, Robert Plant and Robert Smith. Maybe worth a look!" (Thanks Sylvain)

Update: Watch the interview here (YT has blocked the audio) and download it here. (Thanks Paris)
And here's a transcript: "Here is my attempt at transcribing the (very short) RS interview. I am sure this was shot backstage at the Vieilles Charrues Festivals in France in 2002 (other interviews filmed there aired on French TV at the time)
"The fact is that you stop asking questions when you get older you know, for a variety of reasons. Usually because you get a family and your perception changes. I haven't got any children and I think in that way, on a very fundamental level my perception of my place in the world has remained the same since I was a teenager so in that, I think there's a connection between what I write and people over a certain age who are probably starting to question their own existence. I mean I still do, that sounds absurd and I realize that's actually part of the problem you know."
"It's really nice how they appreciate, even if they don't really like The Cure that much, most of the other bands at the festivals appreciate(?) for us to still be doing this so there's a certain respect there. Because (?) still a certain amount of integrity. We kind of do thing because we want to do them." (Thanks Sylvain)
Posted by Craig at 8:01 PM 16 comments

Fletch tells The Washington Post why Depeche Mode shows can't be as long as Cure shows: "The hardest thing about our set list is actually compiling it. It's so difficult with so many songs. We can't do a Robert Smith and play for three-and-a-half hours. I don't think Dave can run around and dance for that long. The problem with the Cure is they did it a couple of times and then when they went back to a normal set people complained." (Thanks Heron)