Went to see Jesus & Mary Chain last night, and they were selling these Christmas cards at their merch table. An investigation into who made them lead to Piper Gates Design. And that lead to the discovery that they also make cards for other bands, including The Cure. Here's the Cure Christmas and Birthday cards. 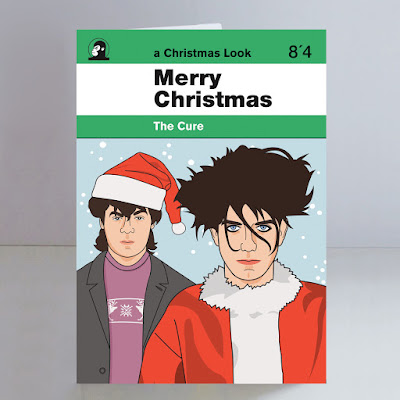 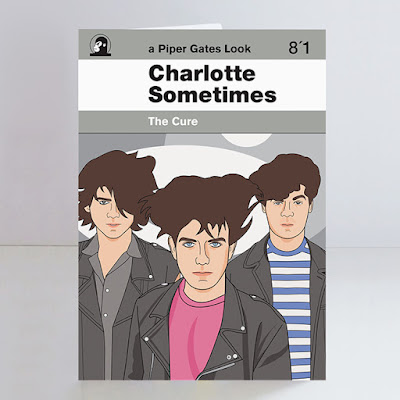 
Pearl's artwork will be on display at Lethal Amounts in Los Angeles from Dec. 16th - Jan. 8th. And on opening night, Dec. 16th, Lol will be there for a 'Cured' book signing event starting at 8 PM. Facebook event page

After that, head next door to Monty Bar for the after party featuring The Curse. From the Facebook event page:

Join us for ‘a night like this’ with live music from The Curse, LA’s finest Cure tribute band since 2003.

The night begins with a live reading from Lol Tolhurst’s “Cured”memoir and an exhibition of Pearl Thompsons art displayed at Lethal Amounts Gallery starting at 8pm. Lol and Pearl will then do a meet & greet signing for fans to close out the gallery event.

If you attended Lol Tolhurst's DJ set ...at the Monty Bar in May you recall how great that was; trust us, you won’t want to miss this very special night celebrating the legacy of two influential musicians/artists!

We expect to hit full capacity so come early and stay late.

For more info on the artists please visit

For more info on The Curse please visit

"We are delighted to announce 'The Cure – Standing Still' for publication in 2017.

For the last 18 months we have been working closely with celebrated music photographer Paul Cox, sorting through and carefully scanning his incredible photographic archive. From 1981 to 2009, Paul worked with Robert Smith and the band on a diverse range of shoots including privately assigned projects, sessions for press use, and promotional sessions for new releases. Paul attended and covered video shoots and a great many private projects, the results of which show him to be an almost official photographer to The Cure. The vast majority of these images have never been published – so this sanctioned and approved limited edition photographic biography, containing over 250 photos from 35 photo sessions will be a unique and important record of such an iconic and timeless band.

We will announce further details for 'The Cure – Standing Still' early in 2017. Please join our Facebook community to keep up to date with news."

The Twilight Sad's photo diary from the tour

Having pulled off one of the marathon live shows of the year, The Cure‘s world tour has come to an end. Now The Twilight Sad, who were handpicked by the band to support them at each and every show, have shared a photo diary of their life of the road with the band.

“I asked The Twilight Sad to join us on The Cure Tour 2016 because they are the best band playing the best songs – consistently brilliant, emotional, intense, inspiring, entertaining,” said frontman Robert Smith  – who also covered their track ‘There’s A Girl In The Corner’. “They have added immeasurably to this year’s live experience – for fans, crew and Cure band alike… and it turns out they are the best people too! I can’t thank them enough.”

See the photos at NME.

We're hanging out in #memphis today at @laurelwoodbooks. Come down and say hi!

It's not every day you get to meet a rockstar. Let alone one as nice as @LolTolhurst. Thanks to all who came out. pic.twitter.com/Bg535kDJmG

'A Forest' on 'Westworld'


@CraigatCoF Am I crazy or did I hear A Forest being played on a Player Piano during Westworld tonight?
— steve clark (@spcdesigns) October 24, 2016

@CraigatCoF There was a great piano version of A Forest in this weeks episode of Westworld.
— Ian Halperin (@IanHalpyHalp) October 24, 2016


Watch the scene here (updated to a better version). 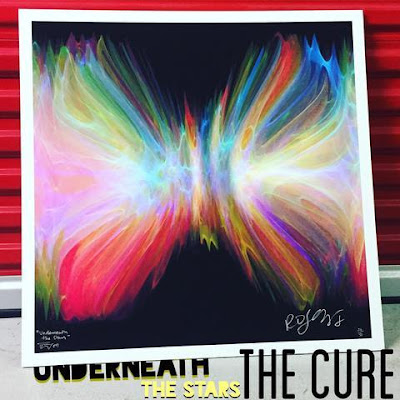 Artwork featured here is benefiting a number of incredible charities chosen by the musicians through Wakefield's own Soundwaves Art Foundation. (see more below.) Each artwork is hand signed by the musicians and the artist and numbered with a certificate of authenticity.

2016 sees the 40th Anniversary of The Cure's formation. One the the world's most enduring bands selling an estimated 27 million albums, they were voted best British Band at the 1991 Brit Awards. Robert Smith chose "Underneath The Stars," for his artwork. Robert signed 50 prints on archival paper in 2009. These prints are now extremely limited. Printed on fine art paper. 28 x 28 inches.