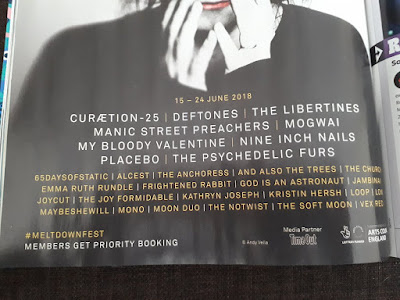 Added to the event: Curaetion-25 (not sure if this is just the name being given to this 25th edition of Meltdown or something Cure related), And Also The Trees, Emma Ruth Rundle, Frightened Rabbit, God Is An Astronaut, Jambinai, Joycut, The Joy Formidable, Loop, Low, Maybeshewill, Moon Duo, The Soft Moon, and Vex Red.

That's according to this ad in Q magazine. The official announcement will be made at 10am on April 10th. These tickets will go on sale to Southbank Centre members on April 13th at 10am.


@CraigatCoF Feature on the Meltdown Festival in new Q magazine. Interview with Carl Barat from The Libertines but nothing from Robert. Still not doing any interviews? Also has a full page ad with the Curaetion-25 listed. pic.twitter.com/LcpDjT83IU
— Matthew Smith (@mattsmudge) April 7, 2018

Photos of the new 'Mixed Up' RSD vinyl

Record Store Day 2018. The Cure - Mixed Up. #RSD18 #vinyl #records #2LP #picturedisc #thecure #limited #exclusive #nowplaying #nowspinning #firstrecordoftheday #elektrarecords #fiction #rhino @rhino_records One of two Cure releases this year, and both will be picture discs. 7,000 in the US and this beaut is SOLD OUT! Pick it up 4/21/18, at a record store near you! #uturnaudio #orbitplus @uturnaudio

" 'Dare to Be Different': See New Doc on Radio Station That Broke U2, Cure in U.S.

The new documentary about the influential Long Island radio station WLIR is coming to Showtime on March 30th. New Wave: Dare to Be Different focuses on how the station helped break some of the biggest British bands of the Eighties like U2, the Cure, the Smiths, New Order, Duran Duran and Depeche Mode in the United States.

Dare to Be Different features interviews with WLIR program director Denis McNamara, other members of the station crew and an array of artists including Joan Jett, Debbie Harry, Depeche Mode and Erasure's Vince Clarke and the B-52's Fred Schneider. "

Update (April 7th, 2018): First 5 minutes of New Wave: Dare To Be Different, the WLIR documentary, includes 'In Between Days' playing during a segment, clips of the IBD video, and a radio station ID from Robert. 25 minutes in, Lol tells the story about The Cure coming to America, looking to buy the Twinkies they saw advertised in Marvel comics.


As @slicingeyeballs pointed out, it isn't ALL CAPS, so probably just his social media person, not actually Robert. And Robert has said that the only place he actually posts updates himself is TheCure.com. Not Twitter or Facebook or anywhere else.

Update (March 16th, 2018): The @RobertSmith and @thecure accounts have finally been verified. Now you know that any other accounts claiming to be Robert or The Cure are fakes. If you're ever in doubt, check for the verification check mark. Unfortunately, the @reevesgabrels account, which has recently had to deal with an imposter trying to scam fans, is still waiting. Get on that, Twitter!

"Release #10 in The Need To Know's Badass Blues Instrumentals Series is Macha Cha Cha featuring the musical sorcery of my friend and sometimes bandmate (Magnificent Others & Sonic Mining Company), Reeves Gabrels. As you probably know, Reeves played guitar and produced David Bowie from '87 through the '90's including Tin Machine. Reeves has been a member of The Cure sine 2012.

The backing band on this track is Rich Kirch (John Lee Hooker 1984-2001) on rhythm guitar, Deszon Claiborne (Robben Ford) on drums and myself on bass. The track was recorded at Skunkworks in Capitola CA and mixed by the mighty Jack Endino (Nirvana, Soundgarden). Masterful mastering by Alex McCollough at True East Mastering.

Cheers and thanks,
Frank & Brian
Need To Know Music / Skunkworks Studio"
Posted by Craig at 8:34 AM

One thing you WON'T be likely to see in my show is me jamming with Rick Springfield on The Cure's 'Just Like Heaven' :) https://t.co/3zXoRM01uP