Voodoo is ready for us

From the Levinhurst Facebook: "A new photo and some new music coming along soonish...!"
Posted by Craig at 10:11 AM 1 comments

Update on Roger's 'Love & Other Tragedies'

Posted on Roger's Facebook: "Just confirmed that the amazing Francesca Ter-berg will be playing cello on the Orpheus and Eurydice story for the Love and Other Tragedies suite. We are set to record in December when I return from Russia and fingers crossed a March release with a premiere performance in London..."
Posted by Craig at 9:45 AM 2 comments

Calm before the Voodoo storm

From an article posted at Nola.com today: "The Cure initially declined a Voodoo invitation. Months later, the band’s reps asked if the slot was still available. By then, Rehage was in discussions with Voodoo veteran Kid Rock’s camp. Both acts ended up confirming the same week. “We talked to both of them, and figured one of the two would hit,” Rehage said. “They both wanted to do it, so we carved out a slot. It all fell into place.”

The Cure following Kid Rock on the same stage recalls such odd Voodoo pairings as rapper Drake preceding Ozzy Osbourne in 2010, or Dr. John abutting Moby the festival’s first year.
“We’ve always had some interesting transitions,” Rehage said. The Cure and Kid Rock “is certainly one of them.”
Posted by Craig at 12:58 PM 1 comments

Local music critic Keith Spera has a story on the new festival grounds Voodoo will be using this year.

Update (Oct. 27th, 2013): Crave has posted a transportation guide, and GoNola has their Ultimate Guide to Voodoo.

And this word of warning from Roger: "OK whats next.... HAHAH Voodoo Festival in New Orleans, if you don't have a ticket and were thinking maybe you wouldn't come... well think again, last Cure show of 2013 its going to (be) massive!" Always trust Roger! Get your tickets here. 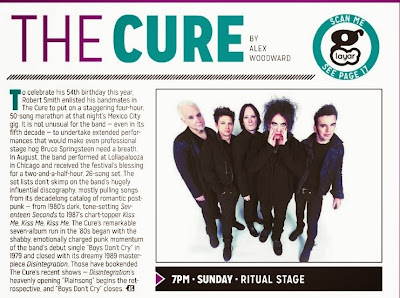 Update (Oct. 28th, 2013): Gambit has published their 2013 Voodoo Guide, which can be picked up locally, or you can read the digital edition here. Nice little Cure article included.

Also, Voodoo has posted "answers to all of your questions". Not included? Will you please give The Cure an extra hour? :)

And here's a survival guide from Fuse.

A list of closings in City Park due to Voodoo.

TV news report from @NewsCarolyn just now says the limited number of single day tickets are almost sold out. If you need them, get them now. 3 day passes should still be available at the gate.

From Voodoo on Facebook: "Deja Voodoo presents Reignwolf plus special guest Baby Bee happening at The Parish House of Blues New Orleans on Friday, November 1st at 11:30 pm. A Loa VIP wristband will get you into the show for FREE."

Interview with Voodoo founder/producer Stephen Rehage.
Posted by Craig at 11:03 AM 18 comments

And here's a report from @NewsCarolyn. Ignore the start times they list, those are the old ones. NIN at 9, Cure at 6:50.
Posted by Craig at 2:52 PM 9 comments