From Fiction Records on Facebook:
"Fiction Records are proud to announce the re-release of the first 5 Cure albums on heavy weight coloured vinyl which have been specially commissioned for Record Store Day on April 21st. Each album will be individually numbered and Limited to 2,500 copies and will also come with a voucher to download the album digitally. This is the first time on vinyl for the remastered versions of the albums which have all been personally remastered by Robert Smith.

We have got our hands on a set of the vinyl test pressings and we're giving you the chance to win them. To win test pressings of 'Three Imaginary Boys', 'Seventeen Seconds' and 'Faith' all you need to do is comment on this post. A winner will be picked at random on April 21st.

For a chance to win test pressings of ‘’Pornography’ and ‘The Top’ click HERE" (Thanks @HaloCure13)
Posted by Craig at 2:39 PM 13 comments 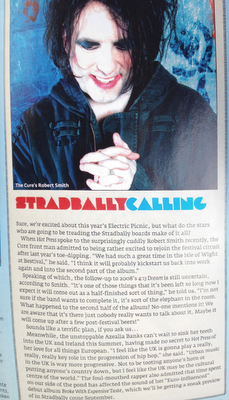 Here's an article from the new issue of Ireland's Hot Press magazine. Note that this isn't a new interview, just excerpts from the interview they ran last August. View larger image here. (Thanks Barry)
Posted by Craig at 8:53 AM 17 comments

To celebrate their 60th anniversary, NME has launched a search for the Ultimate Icon of the last 60 years. You can vote for Robert, or whomever you'd like, here. (Thanks @guillaumegrivaz)

Update (03-22-12): Mark Hoppus of Blink 182 picked Robert - "The Cure were such a huge part of what I listened to growing up. That’s probably my favourite band of all time, and probably the biggest influence on the way that I write music. I think Robert Smith kind of is that whole genre of music. I think if you think about dark, spooky indie rock, it’s The Cure.

He’s crafted that whole genre, and done it in very different ways over his career, from early albums like ‘Boys Don’t Cry’ and ‘Three Imaginary Boys’, which was very guitar-driven, into synthy stuff, then flamenco, weird druggy music like ‘The Top’, and then the likes of ‘Disintegration’. I think he’s just very creative."