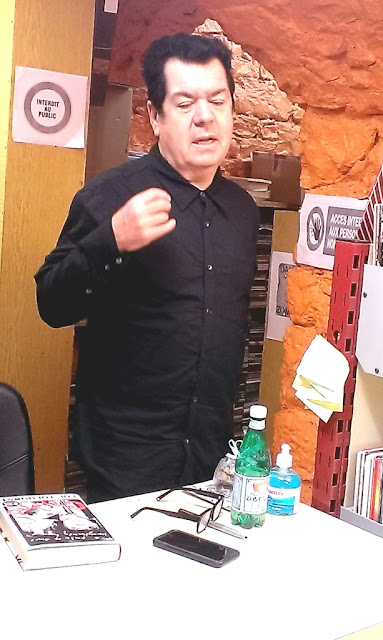 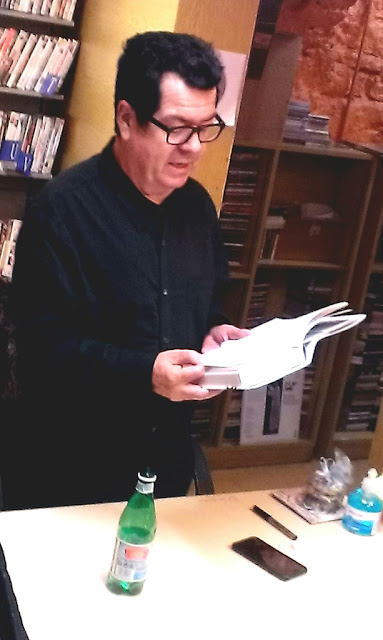 Thanks to Sylvain for the photos.
Posted by Craig at 11:09 AM

1987 was a great year for music, and Paste is looking back at 30 of the most iconic albums released that year:

While The Cure dabbled with stateside success throughout the early 1980s, it was their musically diversified double LP Kiss Me, Kiss Me, Kiss Me that solidified their mainstream surge, especially in America. With four chart-impacting singles—“Why Can’t I Be You?,” “Catch,” “Just Like Heaven” and “Hot Hot Hot!!”—the album went platinum in the U.S. and landed The Cure in the Top 40 for the first time. With its radio success and memorable music video, “Just Like Heaven” became an immediately recognizable, pop culturally defining song for the band. Multiple artists have designated “Just Like Heaven” as their favorite Cure song, with many of them going on to cover the song as well. Of all of the versions out there, Cure frontman Robert Smith has often acknowledged Dinosaur Jr.’s as his personal favorite.
Posted by Craig at 10:44 AM

Win a copy of Tom Sheehan's 'In Between Days'

The Quietus has a contest to win a copy of Tom Sheehan's 'In Between Days - The Cure in Photographs 1982 - 2005'. Contest ends at midday tomorrow, Jan. 27th. They also have an interview with Tom.

How many photos were unseen until this book?

TS: I’d probably say around two thirds of it has never seen the light of day. I met a lot of big Cure fans from all over the world at the book launch who said there was stuff they’d never seen I syndicated a modicum of work with strict embargos but a lot of it was under wraps until now. 98% of it was shot for Melody Maker, as well as some things just for Robert and a couple of bits for Uncut. There’d be a spread picture, a cover picture then a couple of snaps and they might use one down the line for a news feature, but there’s still lots more [that don’t get used]. I like seeing the one shot that was used then two or three others that weren’t because it gives context to that one picture, you can see how it grows.

Read more at The Quietus.
Posted by Craig at 8:08 AM

The Cure, despite being one of the bands most commonly associated with the post-punk label, expanded way beyond those horizons quite quickly during their adolescence. A vast majority of their most highly appreciated work (1989’s Disintegration in particular; Kiss Me, Kiss Me, Kiss Me and The Head on the Door to a lesser extent) came well after their precarious post-punk beginnings, when their sound had drastically evolved to be more dulcet and pop-oriented. Up to that point, they had been a far darker and less approachable band, limited to the mournful fringes of post-punk’s conventional architecture.

Pornography is the masterpiece of the first stage of their career, stark and ominous in ways they would slowly leave behind for more sentimental textures. Post-punk was still coursing through their veins in ‘82; the drums feel mechanical and industrial, the guitars jagged and cacophonous, and Robert Smith’s melodies more sinister than gothic-romantic. Pornography, like Echo & the Bunnymen’s Porcupine, showed a band reaching the peak of their youthful exuberance before entering an age of artistic maturity that would justifiably push their popularity into another realm entirely. But the thrusting forward charge of “The Hanging Garden”, the cavernous gloom of “One Hundred Years”, and wonky dirges like “Cold” and “Siamese Twins” would remain the pinnacle of the band’s sound for many fans. Separated from the initially cold reaction it received upon release, we can now see exactly how critical Pornography was in the expansion of goth rock and, by extension, the cultural reach of post-punk as a whole.
Posted by Craig at 11:29 AM