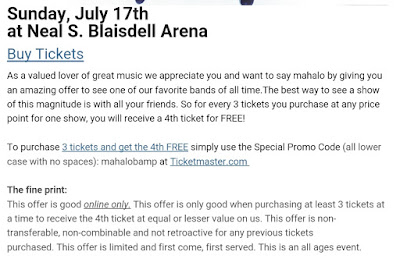 Email offer sent out by BAMP. Buy 3 tickets, get 1 free, for the July 17th show in Hawaii. Use code mahalobamp at Ticketmaster. (Thanks Darrell)
Posted by Craig at 5:34 PM 1 comments

Roger wrote the score for 'Not Ever'

Trying to license 'Killing An Arab' for a film

Update: And the trailer uses 'The Caterpillar'. (Thanks spiralcure)


Writer/Director Marina Person recounts her struggle to get the rights to use 'Killing An Arab' in her new film,  'Califórnia':

Most tricky in Person’s long quest to curate the perfect soundtrack was securing the rights to The Cure’s “Killing an Arab.” The song, inspired by Camus’ “The Stranger,” has been mired in controversy since its release, due to racist misinterpretations of the song’s lyrics. Because in “Califórnia” it accompanies a particularly moving sequence and helps to define a major character, Person reached out to The Cure’s people before filming to receive tentative permission to use the song. However, by the time she was in post-production months later, and had the cash to secure the rights, she was greeted with an altogether different reaction.

“The answer was like, ‘What?! You cannot use it! What?! Who told you you could? You know [Cure frontman] Robert Smith wants to forget he wrote a song called “Killing an Arab.” ’ They were really upset,” she reveals, postulating that the Charlie Hebdo attacks may have rendered parties more wary of giving the go-ahead. Nonetheless, she did not give up.

“I said, ‘No, you know, you have to! I’m going to London and, like, go on strike. I’m going to do a hunger strike in front of Robert Smith’s house; he must let me use it!’ I was kind of desperate,” she recalls.

Following this rejection came a weeks-long process, during which Person scribed several extensive emails detailing her reasoning behind wanting to use the song, which found their way to Smith — who tried to convince Person to use a different Cure track in its place instead. After much debate and handwringing, she was eventually granted permission, which brought Person some much-needed relief. “I couldn’t sleep, I couldn’t eat. I was totally obsessed with it.”

(Thanks @vegansang)
Posted by Craig at 9:55 AM 5 comments (Thanks Mike, Ryan, Jean-Francois, and @arcticsounds)

Be careful when buying/selling tickets online


I know this goes without saying, but you need to be careful about who you're dealing with when buying/selling tickets online. Perfect.Murder offers up this recent example of a possible scam:

"I was contacted yesterday by someone who sounded legit initially, offering me 2 tickets to Copenhagen shows (i am asking for tickets for that particular show in the European tour section on your page)..
After a couple of back and forth i grew suspicious until this morning’s final email which i will copy paste below..

When Western Union and Ghana shows up in an email…. alarm bells SHOULD START ringing.
Some fans may not be that wary, hence my email ……

THESE ARE THE EMAILS FROM THE SENDER, WHICH WENT UNDER THE NAME OF: LEXIE NEUMANN EMAIL lexieneumann@yahoo.com

New interview with James from The Twilight Sad

Patrick Dalziel has a great interview with James Graham from The Twilight Sad. Lots of Cure Tour & Robert Smith talk. Some highlights:

Everything seems to be going quite well for you guys, after a decade you have four LPs, playing the Hydro and getting asked to guest on other people’s albums. As well as all this you have The Cure support slot on their massive tour! Is that nerve wracking or exciting for you?

I think it’s a mix of everything which is good, cause if you were just terrified about it, then you’d be just worried about it. The one thing I’m more nervous about is playing in front of The Cure. The thousands of people that are going to turn up to see them, if they’re going to like us or not, I’ve kinda decided in my head that we’re just gonna do what we do. But, it’s playing in front of your idol every night. I’m nervous about that, but I’m really excited.

It’s the opportunity that even bands that have money flung at them, that are signing big record deals and all that stuff would love, it’s like the best tour support of all time. And the way that it’s happened as well, that we’ve been asked by Robert Smith to do it. Not just because, someone else knows their management company or they’re on the same label, no this guy like what we do! It’s the best way you can get asked to do something. So, I want to go and prove to him that he’s made the right decision to take us away.

But, we were watching the wrestling back stage earlier on and an old Summer Slam came on, showing a helicopter’s view of Madison Square Garden, and I was just like “God! We’re going to be playing there!” That was scary. It’s a mixture of emotions, but it’s all pretty phenomenal. We’re just a bunch of pals from Kilsyth getting to do this stuff. If you’d told 15 year old me that this would be happening I would have punched you, or tried to cause I can’t fight.

You said that Robert Smith approached you with the idea of touring, he also covered your single “There’s a Girl in the Corner” How did that come about?

We’d been in contact, well Stuart from Mogwai sent Robert an email saying that he recommended our latest album (“Forget the Night Ahead” 2009), and Robert said he was already a fan of us. Stuart sent us his email and I was running about my house like the kid from Home Alone shouting “Aaah!” That was enough for us, we were just like “Robert Smith likes our band, that’s cool” Then we had a remix album (“No One Can Ever Know: The Remixes” 2012), and we were going to ask Robert to do that because we saw he had done stuff with Crystal Castles. He said he was up for it but it just didn’t work out.

So then we thought for our release of “It Never Was the Same” we thought we’d like someone to cover one of our songs. We asked friends if they wanted to, and there were people kind of interested and then we thought “Fuck it, we’ll email Robert Smith and see what he says” Lo and behold he got back to us saying he’d love to, we actually asked him to cover “It Never Was the Same” But he got back saying he’d rather do “There’s a Girl in the Corner” And we were like “You can do, whatever the fuck you want” And then one night after playing San Francisco, Andy (Macfarlene- guitarist) got the email through with the track on it. We listened to it about four or five times kinda speechless, like there’s this guy who’s an icon in the music industry singing the words that I wrote in my bedroom. Pretty surreal. But, it’s the biggest compliment you could ever be paid.

Have you met The Cure yet?

No, not yet. We’ve tried to meet up a few times at some of our gigs, but we’ve not been able to make it happen. If I was them I’d be worried, like he invited us out for the rest of the year to tour with them, and the reality is we’re a bunch of absolute rockets. So, after two days he could be like “What the fuck have I done?” But, I’ve heard he’s a really nice guy. Stuart from Mogwai and him are really good friends, and I’ve only heard that he’s really nice. And, he’s proven that with what he’s done for us on the tour! He’s went over and above to help us out, to make sure everything is the best it possibly can be, and I would never expect anyone to do that. cause once you get on the tour, it should be your own job to do stuff. But he’s looking after us, he’s taken us under his wing.