'In Between Days' book now at Amoeba


Pick it up in store or order online here.
Posted by Craig at 10:15 AM 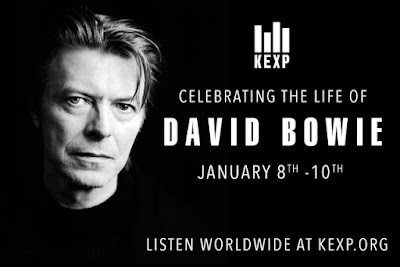 From KEXP: "It was a year ago this week that KEXP both celebrated the birth and then shockingly, mourned the death of David Bowie at the age of 69. With the help of both those who knew him best and the man himself, KEXP will dig deep into his influential catalog of music spanning nearly 50-years.

Beginning Sunday, January 8th, on what would have been David Bowie’s 70th birthday, and culminating Tuesday, January 10th on the one-year anniversary of his passing, KEXP DJs John Richards, Cheryl Waters, Stevie Zoom, Larry Rose and Evie Cooke will share rare songs, and we’ll hear from those who knew Bowie best, including producers and friends Brian Eno, Tony Visconti and Nile Rodgers, as well as, Robert Smith of the Cure, Nine Inch Nails’ Trent Reznor and even the former Thin White Duke himself. Clips from these interviews will be featured on the KEXP Blog, alongside videos, news, and a list of Bowie-related events around Seattle.

“Last year we celebrated 12 hours of Bowie on his birthday and the release of Blackstar. Little did we know he was near death. Days later when we woke up to the terrible news, we turned around and did 12 more hours of nothing but Bowie,” said KEXP Morning Show host John Richards. “There may not be another artist who has influenced and informed every aspect of the KEXP mission than David Bowie. His music has not only influenced nearly every broadcast day that we’ve been on the air, but clearly, his art has propelled so many of the artists we love. Thank you, David Bowie. We miss you every day.”

Thanks, @gorillathelunk.
Posted by Craig at 11:59 AM

#CURED book signing at @GolondrinaSD in #BarrioLogan with Lol Tolhurst, co-founding member of The Cure, this Saturday from 2-5pm. pic.twitter.com/iY1CcTFVsx