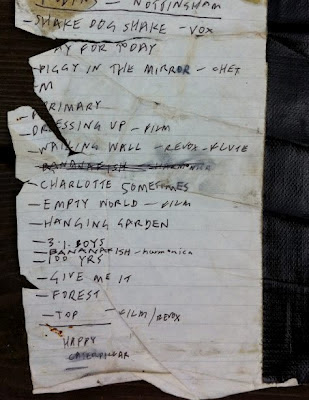 Daryl Bamonte posted this on his Facebook today, Robert's handwritten setlist for The Cure at Nottingham Royal Concert Hall on April 30th, 1984. Daryl has also been posting photos of a lot of great Depeche Mode stuff, too, so thank you, Daryl!
Posted by Craig at 4:37 PM 24 comments 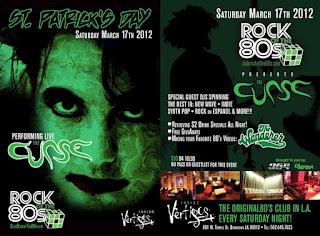 From The Curse ‏ @TheCureTribute - "We just added a show and it's less than 2 weeks away! Saturday March 17th 2012 @ Vertigo's Full Details coming soon...."

On Triple J's Take 5, Tom Delonge (Blink 182/Angels & Airwaves) picked The Cure as one of the bands that changed his life, explained how, and played 'Push'. (Thanks Dave)
Posted by Craig at 10:56 AM 1 comments

Tear Out The Pages With All The Bad News

A very nice article by Simone Scott Warren at DIY, explaining that when it comes to The Cure, "it's a genuine case of heart over head." (Thanks David)
Posted by Craig at 9:49 AM 2 comments

Robert interview in the new NME 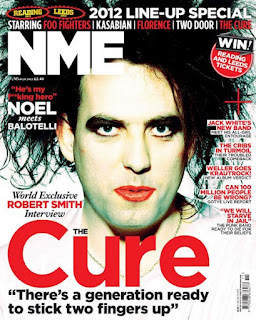 Preview of the article here. (Thanks ADM, Barry, John)
Buy a digital copy here. £1.75 and available now.
Excerpts at NME - "The band, who released their last album '4:13 Dream' in 2008, do not currently have a record contract, and Smith says they have no plans to record any new material. "

I've transcribed all of Robert's answers from the article:

- Robert confirms that the band are without a record contract at this time, and that he isn't even signed as a writer.
"We've been going for so long that I don't feel that urge to 'capitalise' on everything all the time. I mean we're headlining pretty much every major European festival and we won't have anything released. Anyone else would be tearing their hair out. They'll be like, 'You're idiots!' and perhaps we are. It's almost like we've gone full circle and we're back to the point where we're playing Reading Festival and I'm doing it solely because I want it to be a good day. Leeds too of course. I can't see our career arc anymore. I've got absolutely no idea. We haven't signed to anyone since the last record came out and the contract was up. I'm not even signed as a writer. To be really honest, if we're going to do something it has to really good. That sort of goes without saying, but our quality control is very high, and if I don't think that what we're doing is good enough then there's no point in putting it out. Why should I?"

- Robert regrets not making 4:13 the double album he intended, but was "worn down by the fucking idiots around me at the time".
"I shouldn't have. I should have stuck to my guns, released a double, it would have sold the same, and it would not make any difference to anyone except it would have been a better piece of art. Whenever I go back to them I'm missing something. And what I'm missing is some of the songs from '4:13 Dream', because 4 of the songs on that album were supposed to be on this album, and 4 of the ones on this unreleased one are supposed to be on that."

- He has 12 tracks, including instrumentals, that he wants to release, but only as part of a double 4:13 album.
"I'd love to resequence it and bring it out as a double album, and remix '4:13 Dream' and charge a single CD price so that no-one's being ripped off, and then you can hear it as it was supposed to be."
"And on top of all that, The group who made it doesn't exist anymore."

- He's excited by the new songs the current stripped-back band are playing.

- This is the NME writer, Hamish MacBain, speaking, not Robert: "So without a label, or any suitable outlet for songs recorded that they feel they cannot move on from without releasing, The Cure in recorded guise are, to an extent, in limbo. Thus Robert's recent output has been restricted to select guest spots."

- He has 2 more collaborations with "dance acts" that should be out at the end of May, but doesn't name them because "it's their thing and I don't want to spoil it."

- He is open to doing 'Not In Love' with Crystal Castles at Reading/Leeds. Didn't want it to be a distraction for himself at Bestival.
"I watched them do that song at Bestival from the side of the stage, and there were many raised eyebrows and back-and-forth meaningful looks. But I resisted the temptation to burst onstage and do a guest spot. I suppose I was very aware that it was our first big festival for a while and I wanted to feel right and ready for it. I'd only turned up an hour before, and I thought, 'If I go on now and make a mess of it, it's going to upset me for the rest of the day.' But I'll be a bit more in the swing of things by then, so I might do. There's a few people, actually, that it would be interesting to do something with. Maybe between now and then I might arrange a few things."

- Robert on doing so many guest spots lately: "I did stop and think to myself recently, 'I've gotta stop doing this', because otherwise that's what I'll be doing for the rest of my career: just doing guest spots on other people's stuff"

- Robert on trying to enjoy other bands at the festivals: "Sometimes it's a bit difficult, because you find people in front are watching you as you're trying to watch the stage."

- Sounds like we can expect a Bestival type set this Summer.
"We concentrated a lot on the more well-known songs and we went down well. There have been times when I've just played whatever I wanted to play and I have had absolutely no regard for the audience, whereas now I kind of consider that I'm part of an event. I'm aware that we're playing probably to a lot of people who would otherwise not come and see The Cure. We're part of the weekend. So it's kind of dumb really not to try and play tracks that are your most accessible songs."

- Robert on the criticism he took over his "No free music" post: "I was vilified by a lot of the mainstream media - particularly online where there's a vested interest - who tried to turn it into like, ' Oh, I don't wanna give stuff away for free because I wanna make money out of it,' which is totally at odds with what we do because we often release stuff that's entirely for charity. We have no interest in making money out of everything we do, we never have. My point is it devalues the art and I hold by it. To me it's worth something. I'm happy to pay for PJ Harvey's new album. And I think anyone should be because it brings me hours of entertainment and pleasure, so why should it be the one area of life where it's free? It doesn't make any sense to me."

- Robert on the sort of new guard/old guard mentality that might exist now like it did with The Cure and Robert Palmer in 1981: "The point is: we don't occupy the same position at all. Although we're now considered an 'older band', I don't think there are many younger bands who don't have some kind of respect or admiration for what we've done, and what we still do. I think that's the difference. We're not seen as having followed some well-laid path to success. In fact, in a lot of instances, we've actually pushed things forward, and allowed bands to come up behind us. We've changed the landscape a little bit in some ways. That old guard we were up against in the late-70s, they were seen as an industry. And that industry is still there, but the fact is that it's represented just as much by younger artists. There are a number of younger acts I could name who are equally as offensive as we found Robert Palmer at the time. Who just represent 'music as business'. And that goes back to why we're doing this. I want to be part of the experience when we play, not just some performer selling my wares to people."

- Robert on fighting his "Own personal battle, trying to keep what we do as something that's pure", with regard to branding and sponsorship: "I am aware of how grotesquely out of touch I am, but I'm willfully out of touch with the modern world. It's very difficult for me to convince a younger generation that it's wrong to sell things, to use music for adverts. I realise I'm in a fading minority of people who find it objectionable. And that's just because I can remember songs that I loved being used to sell shit and I think it devalues it. It's horrible. I don't wanna think of a car when I listen to Jimi Hendrix or Nick Drake. I hate branding, I hate labels, it's all just shit - it's everything we rallied against when we were younger. And it hasn't made any difference. The corporate beast has won...but only for the moment. There are cracks appearing. There must be a generation raring to go that stick two fingers up at it all and says we don't want to be branded, and sold to in this way. It has to happen sooner rather than later."

- Robert on their first appearance at Reading Festival: "We were perceived as the enemy by the mainstream rock festival crowd. We were part of this vanguard of upstarts that were trying to upset the status quo, and there was just an element of the crowd which was really anti any band that went on that was part of the so-called new punk or new wave. Which was fine. I realised that we were seen as a part of a movement that was trying to replace some of the old guard and I was quite happy about that, because I thought a lot of them were fucking awful! Generally, rock was not really our kind of thing. So that was the first and last time we really did a 'rock' festival, because we didn't have a very enjoyable time actually on the stage. In fact, the worst part of the day was our 35 minutes on the stage."
Posted by Craig at 10:34 AM 111 comments