As Slicing Up Eyeballs pointed out a couple of days ago, someone has once again uploaded the complete version of 'The Cure In Orange' to YouTube. Now if only Robert and Tim would just "upload" it to DVD & Blu-ray. :)
Posted by Craig at 8:05 PM 8 comments

Help with this photo? Mystery solved! 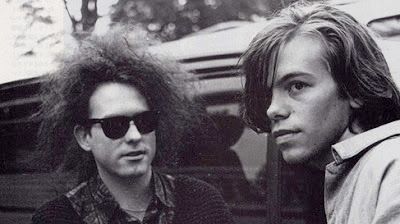 Anyone know who took this photo of Robert and Mark Gardener? Eric wants to include it in the 'Beautiful Noise' documentary. If you know the photographer, please let us know. Thanks!

Update: From @ian_read - "it was in either NME or Melody Maker (think it was June 1991?) for The Pixies Garden Party, sorry, but not sure who took it." Anyone have that issue and can look it up?

Update: The info has been found in Japan! "The article was from an old Japanese music magazine called "Music Life". The article said that the photo was from the Pixies show on June 8th, 1991 at Crystal Palace in London. Ride performed as the opening act and RS visited them. And you can find the credit of the photographer at the bottom of the scan which says; pic:Martyn Goodacre/s.i.n./orion press " (Thanks Anonymous)
Posted by Craig at 5:00 PM 14 comments

Roger's 'The Story of Shéhérazade'

composed and produced by Roger O'Donnell in 2010
mastered by Guy Davie at Electric Mastering in 2012 • London, UK