Extract from the 'Cured' audiobook

The audiobook will be available in the UK on Sept. 22nd here, and in the US on Oct. 11th here.

Enjoyed seeing @LolTolhurst of the Cure talk about his book Cured & can't wait to read it! See him at @otsfestival pic.twitter.com/OFXNZsyZCZ
— Loretta de Souza (@LorettadeSouza) September 24, 2016

How did @LolTolhurst prepare to write #cured? 'I read every music memoir and autobiography I could get my hand on.' pic.twitter.com/asegDgBjXf
— QuercusBooks (@QuercusBooks) September 24, 2016

"Lol will be on John Kennedy's RadioX show on Wed 21 from 10pm (BST). Listen via http://RadioX.co.uk! And I dare say there'll be a podcast of it later on in the week..."
(Thanks @Martin_OGorman)

Update: If you missed it, listen to it here.

Had the pleasure of interviewing @LolTolhurst about Cured today. pic.twitter.com/L3uuh9JWAN

@CraigatCoF Lol Tolhurst in Manchester, when asked about The Cure's appeal in France - they understood our philosophy pic.twitter.com/jpZzAPnyp1

@CraigatCoF Lol Tolhurst, Manchester, 22nd Sept 2016 - the places that they really got us were France and California pic.twitter.com/BMcPU776ys

.@LolTolhurst signing for the crowds at @waterstonesNW1 tonight! Amazing first event and 4 more to go! pic.twitter.com/ToIeJXpJoV

@CraigatCoF great night chatting with Lol and fans who came from as far as Paris & beyond pic.twitter.com/WC62QpDttL

Another fabulous evening in 2016! Lol asked how I found LA! A lovely man and a fantastic turn out to see him in Camden! Now to get reading his book! Emotional as ever! #thecure #loltolhurst #cured #memoir #waterstones

If you can't make it to any of the events, you can still pre-order a signed copy from Waterstones.

And there will be some posters featuring Pearl's artwork up for raffle. From Lol on Facebook: "At UK events I will be bringing a very limited amount of some very special posters featuring exclusive Art work by Pearl Thompson for the book tour. We will have a free raffle for a few of the posters at each event so get there early !"


And from Lol on Facebook: When asked about France and the rest of Europe: "Next year , book and tour." and "Next year European tour."
Posted by Craig at 6:35 AM 13 comments 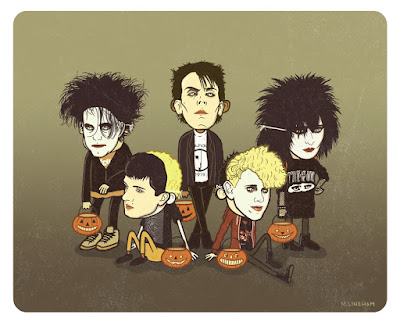 'Happy Gothoween', a new print from Matthew Lineham, who you might remember from his New Wave Saints and Valentines.
Posted by Craig at 7:51 PM 14 comments

Lol interview in The Guardian

The suburbs of the 1970s are a vivid presence in the opening chapters of your book. Was forming a band a reaction to the bleakness of it all?
People forget that in 1970s England there was still a hangover from the second world war, postwar austerity was still around and that didn’t change till the 80s. The only thing for us to do – our only defence – was to make our society. In that way it was a good thing, because it stimulated people to do stuff. If you’re too comfortable, you probably don’t want to change things too much.

You and Robert found an escape in punk – what was it that appealed?
I can remember the first Clash album, and it was something completely different for us. We’d been used to either disco or overblown prog. But the energy of punk completely resonated, and that idea that something had to change. But then, of course, we put it through a slightly different lens because we were more isolated than somebody who was living in the capital; we took longer to register how things changed.

There are quite a few violent incidents in the book!
I look back on it now and I realise it was probably all quite dangerous, but it was something we were used to. We dressed in old mohair jumpers and jumble-sale trousers and walking down the streets in Crawley, people would always say things to us. And then sooner or later, someone would come out and try to take a pop. At one of our first proper gigs in Soho, we had a lot of skinheads there who had assumed something entirely wrong about us from the title of Killing an Arab. We were expecting them to lay into us but then the biggest guy, with a tattooed eagle on his chest, decided he loved us and after that, we were fine. Even at that age, Robert was able to make people feel somehow included.

Read the rest at The Guardian.
Posted by Craig at 10:21 AM 0 comments