From the Daily Mail: "The Royal Albert Hall has been given the Sgt Pepper treatment by artist Sir Peter Blake, who has created a giant collage featuring some of the names who have graced the venue's stage.

Titled 'Appearing at the Albert Hall', the triptych depicts figures from classical music, rock and sport who have made appearances under the dome of the London venue." (Thanks Kelly)

'Wish' performed in its entirety tonight

All proceeds to benefit Mountaineer Boys & Girls Club and Another Place, Another Time.

(Thanks AndyTheCureFan via madgekin on Instagram)
Posted by Craig at 9:33 AM 11 comments

More articles celebrating, and looking back at, 'Disintegration'.

Happy 25th Anniversary to one of our all-time favorite albums: @thecure's "Disintegration." Who knew heartbreak could feel so damn good?
— Airborne Toxic Event (@Airborne_Toxic) May 2, 2014

From Kenneth Partridge at Billboard:

No need to check the almanac to see what the weather was like on May 2, 1989, the day the Cure released its eighth studio album. Once copies of "Disintegration" started hitting CD trays and turntables, the skies turned grey and the rain began to fall, and sad boys and girls everywhere soaked it all up like sponges.

Such is the power of these dozen songs — slow, dark, sensual ruminations on losing love and feeling washed up. Oddly enough, when Cure mastermind Robert Smith began work on "Disintegration," he was a recently married 29-year-old whose pioneering U.K. post-punk band was finally making headway in America. The group's previous album, 1987's "Kiss Me, Kiss Me, Kiss Me," had reached a respectable no. 35 on the Billboard 200, and after more than a decade in action, they seemed poised for breakout success.

Still, Smith was completely freaked by the prospect of turning 30, and amid tensions with his bandmates, he worried he'd missed his chance to make a masterpiece. Such was his motivation for going off and writing much of "Disintegration" on his own. He emerged with a set of droning slow-burns inspired by the overall cruddiness of his situation, and not surprisingly, his label wasn't pleased.

Indeed, "Disintegration" had "commercial suicide" written all over it, but it proved gloomy in all the right ways, climbing to no. 12 on the Billboard 200 -— the Cure's highest chart placement to that point. The follow-up, 1992's "Wish," reached even higher, peaking at no. 2, but "Disintegration" remains the Cure's best-selling LP, as well as the one people still talk about. It's made countless all-time best-of lists, and 25 years later, it sounds like nothing in the band's discography -— or in anyone else's. Keep reading for our track-by-track take on this melancholy stunner.

From Lyndsey Parker at Yahoo Music:

"Twenty-five years ago this week, the Cure released the magnum opus that Kyle from "South Park" once rightfully declared "the best album EVER!" While the Cure's epic eighth studio effort, "Disintegration," was among the band's gloomiest and doomiest (frontman Robert Smith always considered it an unofficial companion to 1982's intensely, brutally dark "Pornography"), it ironically yielded the band's sweetest — and most commercially successful — single, "Lovesong."

The Cure broke out of the post-punk underground in the mid-'80s with "The Head on the Door" and its double-disc follow-up, "Kiss Me, Kiss Me, Kiss Me." But it was 1989's "Disintegration" — the culmination of all of Robert's stylistic experiments, simultaneously gorgeous and raw, melancholy and exuberant, grandiose and intimate — that transformed the Cure into stadium headliners. After slugging it out with a revolving Cure lineup since 1976, Robert Smith — with his spidery hair and trademark smeared scrawl of crimson lipstick — had somehow become one of music's most unlikely and reluctant rock stars.

And all along the way, a girl named Mary, who inspired "Lovesong" and soon after that became Mrs. Smith, had been by Robert's side.

NME takes a look back at 'Disintegration' 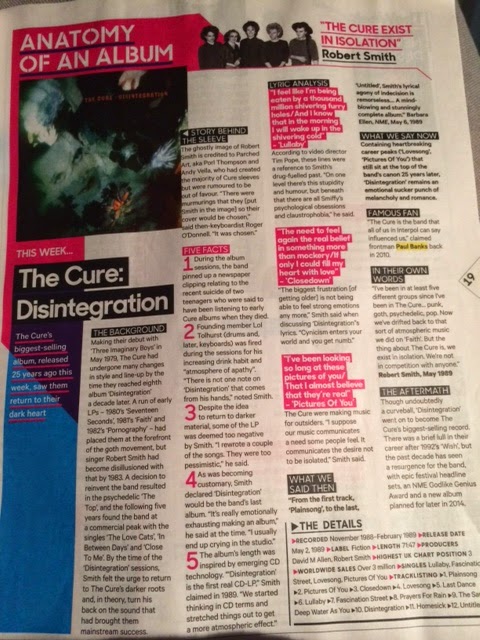 This week's NME features 'Disintegration' in their Anatomy of an Album feature. (Thanks Perfect.Murder)

And no look back at 'Disintegration' is complete without a reading of Roger's wonderful Memories of Making the Album.