Over the past month, Charles Libin has been posting some fantastic videos of The Cure playing at Hurrah's in NYC from April 1980.  The videos were shot by Charles Libin & Paul Cameron. Thank you so much for uploading them! And thanks to @guillaume_g_z for showing them to me.

Ranking: Every Alternative Rock No. 1 Hit

Consequence of Sound decided to do a ranking of every song to hit #1 on the Alternative Rock chart. Here's where The Cure placed:

263. The Cure – “Never Enough”
Date Reaching Number One: 9/29/90
The straightforward rock guitar strains of the one lackluster new track from The Cure’s 1990 remix collection, Mixed Up, sounded almost as out of place among the most popular alternative singles of the time as it did tacked on the end of a collection of extended mixes, and yet “Never Enough” spent three non-consecutive weeks on top of the modern rock chart in the fall of 1990. –Sarah Kurchak

108. The Cure – “High”
Date Reaching Number One: 4/11/92
At their best, The Cure were able to make you feel happy about being depressed, sweeping you up in their magical wisdom and punchy melancholy. “Wish”, the first single off their 1992 album, High, literally begins with a sparkly twinkle, as if Robert Smith has opened up the storm clouds and swept you off your feet in all his splendor and glory. From there, the song capitalizes on all the band’s accessible trademarks: the cozy bass lines, the earworm guitar hooks, and Smith’s teardrop poetry. For added measure, there’s even a feline overdub that would be way too obtrusive and atrociously precious if it were coming from any other band. Here? It’s David Copperfield-type shit. Now, that’s some power. –Michael Roffman

16. The Cure – “Friday I’m in Love”
Date Reaching Number One: 6/13/92
Just how good is “Friday I’m in Love”? Robert Smith was so impressed by the melody he wrote that he could have sworn he stole it from somebody else (he didn’t). The recorded song that appears on The Cure’s 1992 album, Wish, is slightly faster and more upbeat than the version the band rolls out at shows, which is really just as well. It’s a deeply nostalgic love song, and don’t we always remember past romance in a slightly different key? –Collin Brennan

And one Cure cover made the list. This godawful thing:

281. 311 – “Love Song”
Date Reaching Number One: 5/1/04
311 offer up a perfectly serviceable, reggae-flavored tiki bar rendition of this Cure classic. And somewhere back in 1989, Robert Smith is still sitting alone in a cave among stalagmites wondering what he’s gotta do to feel his enduring love reciprocated by the charts. Hopefully, a new generation of spelunking Cure fans soon found him and explained that 311 had sent them. –Matt Melis
Posted by Craig at 1:41 PM 7 comments

Ranking the Albums from 13 to 1

What is it, ranking season or something? Chris at PopMatters ranks The Cure's albums. Won't list it all here, go read his article on the whys for each one, but here's his ranking: 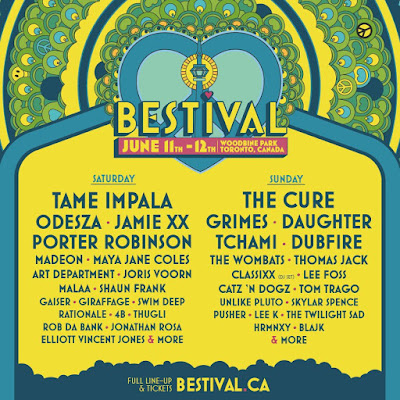 IF?!?! Seriously? Now that you've posted that, if the band plays even a 149 minute set, some will be chasing you out of Toronto with pitchforks and torches! :)
Posted by Craig at 9:00 AM 25 comments