'Three Imaginary Boys' is the historical album of the week at Foknieuws (English). (Thanks David)
Posted by Craig at 3:37 PM 0 comments

There's a new Cure book out in Argentina, THE CURE LA LEYENDA DARK, by Sebastián Duarte, and published by Distal. Listen to an interview with the author here. (Thanks The Cure Rarities)

More info on the book here. (Thanks Diego)
Posted by Craig at 8:56 AM 2 comments 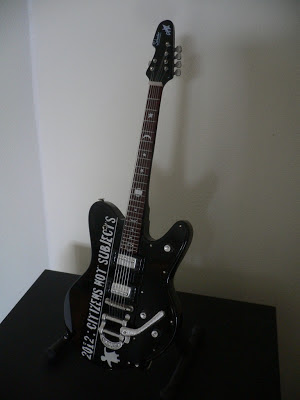 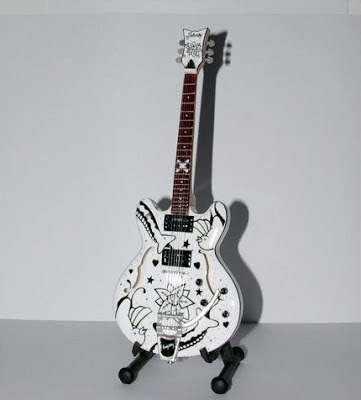 "Did you know? There are 2 miniature Schecter Cure guitars out there. The UltraCure and the one Porl used during the 4Tour. They are about 24 cm high and nicely made.
I found them on a French ebay shop called cultura-one for about 21 Euros each. It seems he hasn't got any in stock now, but maybe they can be found somewhere else on the web?" (Thanks Sylvain)

The Family Wash in Nashville, TN
Posted by Craig at 8:25 AM 3 comments

Reminder: Ross Robinson is an asshole

From Cracked: "Yes, Robinson will totally throw fire at you if he doesn't like what you're doing. Just ask the Cure, who Robinson completely snapped at after several lackluster takes. He went full R. Lee Ermey on their gothic asses, swearing at them, insulting their legacy, throwing about a hundred lit candles around the studio, and laughing maniacally at the keyboardist's tears and tantrums. As Robinson put it, "Sometimes musicians need to feel certain things to emote, and a lot of times, that thing will come out with a little coercing. So sometimes it comes in the form of an object being thrown at their head while they're tracking." (Thanks Pietro)
Posted by Craig at 1:40 PM 45 comments

Harvest Festival tried to get The Cure

From The Music: "After the news broke this morning (about Neutral Milk Hotel playing there), Harvest's promoter AJ Maddah appears to have confirmed the report and admitted that the festival couldn't secure The Cure. "We did try for The Cure," he tweeted. "They're not adding any more dates this year."
(Thanks craneman)

Well we know this is sort of false. Maybe not booking any more shows for this year, but they'll be adding more dates. As Robert said/typed, "...AND STILL MORE TO COME!!!" :)

In her Sonic DNA feature for The Quietus, Natasha Khan (@Bat_for_Lashes) picks 'Disintegration' as one of her favorite albums.

"I was probably about 17 [when I first heard it] and this one for me is very much about falling in love. I didn't realise for ages how much it must have influenced me because of the phasey synths, the layers of phasey guitar, the romance and the gloominess and depression, but within that depression there's always those bursts of euphoria and that sad/happy line. In music I tend to really enjoy the sad/happy dichotomy; they've been put together and it breaks your heart but you love it at the same time. You want to cry but you want to smile, and I think really hearing phasey guitars, massive intros, really lush, long droning synths, and Robert Smith for me, on 'Lullaby', it's just such great storytelling: "Quietly he laughs and shaking his head / Creeps closer now, closer to the foot of the bed". It's just like weird, dark, gothic literature or weird Roald Dahl stories or kids' stories about adult anxiety but told through Charlotte's Web-like fables and storytelling. 'Untitled' has harmonium and stuff and then it kicks into massively reverby drums, quite shoegazy, and 'Disintegration' is such a great song, I absolutely love it, and there's loads of really long intros where he just sings at the end and when you hear him yelping, "yeeeeah!". I felt like him and Björk at the time were both really exploring feral, expressive vocal sounds - and I think Robert Smith is a really underrated vocalist, not even underrated but I think he's like [mimics Robert Smith] and it's really free and endearing, just very unique I think." (Thanks @SoMuch2Answer4, @i__a__n, and Filip)
Posted by Craig at 12:15 PM 2 comments