Original post (6/12/11): As some of you know, Perry was recording with Steve Hewitt of Placebo last year, and it looks like we might finally get to hear some of that work. Perry and Steve are listed as "additional collaborators in studio and live" with Polaroid Kiss (also on MySpace and Soundcloud), who's debut EP, 'The New Coliseum', is listed for release this summer, and their album, 'Weakness of the Beautiful Souls', is listed for a late 2011 release. Perry plays guitar on a track called 'Walk the Room'. Will be so nice to hear from Perry again!
(Thanks to Friend of CoF for help with this)

Update (09/15/11): I asked Polaroid Kiss about which tracks Perry actually plays on, and here's their reply - "He may record on other tracks in the future. But currently: 'Walk The Room (Album Version), Pay Your Dues & The New Coliseum"

And more from @Polaroid_Kiss: "His guitars are mixed much more prominently on the album versions of those tracks, You will hear that "cure" sound very clearly. The last time we conversed he was doing a film project w/ Gizz Butt (the Prodigy) & wanting time off music to pursue artwork"

Update (05/10/12): The Polaroid Kiss album, Weakness of the Beautiful Souls, has a release date of July 3rd, and is up for pre-orders now. As mentioned below, Perry plays on 2 tracks, 'Walk the Room' and 'Pay Your Dues'. (Thanks Mars)

Disintegration - the best album ever

Alastair Ross, writing for Blog On The Tracks at Stuff, makes the case for 'Disintegration' being the best album ever.
(Thanks Alastair and Matt)
Posted by Craig at 11:19 PM 4 comments

The Cure at the R&R HOF ceremony...sort of 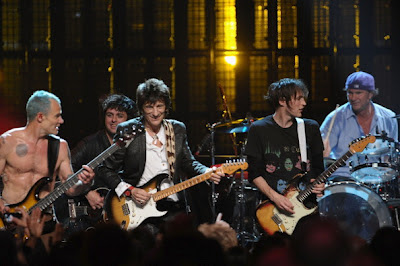 Josh Klinghoffer of the Red Hot Chili Peppers wears his Cure shirt at the Rock & Roll Hall of Fame induction ceremony. Tribute? Protest? Either way, nice to see. (Thanks John)
Posted by Craig at 9:31 AM 9 comments