Cure at Roskilde 2012 on PureFM Sunday

Cure at Southside 2012 on EinsPlus Sunday

"A BIG CURE TRIBUTE PARTY is organized at "CONNEXION LIVE" in TOULOUSE, in south of FRANCE, on saturday 29th of september : 9 bands will cover songs from THE CURE (T Teen, Abberline, The deserteurs, Clone Clowns, Face B, The Ruby Cube, Fancy Dress Contest, My Imaginery Loves, Alone with Everybody)...my band FANCY DRESS CONTEST will cover PICTURES OF YOU...then 2 DJ's (MR BARNES + DJ POPISSIMO) will mix 80' songs...it will be a BIG CURE TRIBUTE PARTY, Up to 500 persons are expected. More info here. (Thanks Sebastien)
Posted by Craig at 3:34 PM 2 comments 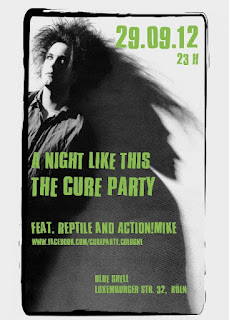 Love and Other Tragedies

From Roger on Facebook: "Some news for December, yes I know its June but you have to plan ahead. Julia Kent and I will be releasing an album together called Love and Other Tragedies. It consists of our versions of classical love stories each in three movements.

We will be performing the album in its entirety in London, New York and Paris in December with hopefully members from her all cello group Rasputina.

We will of course film at least one of the performances... The album will be released in December at the same time as the performances in vinyl and digital download only.

I think Julia is the single most talented musician I have ever worked with and I am very very proud of our work together, its truly an honour to play with her." (Thanks Johan)

Update (Sept. 5th): From Roger on Facebook - "Love and Other Tragedies" is finished! I finished writing it yesterday and have sent the new pieces to Julia to record in NYC. Im just listening to the 3 tracks we have recorded already and its so so beautiful. We are talking about playing shows in December. But you'd better bring tissues hahaha its very very sad..."

Update (Sept. 28th): From Roger on Facebook - "For many reasons the release of Love and Other Tragedies has been put back until February 14th next year. Good news is Jo Quail will be playing with Julia Kent and I at the release show with two other guest cellists. There will only be one show and that will be in London at the end of February, hopefully at St Leonards.... See you there!"

Forgot to post this last month. From Tim Pope's website:
"Great news, look what I just found in the storage place! Original 35mm prints, all... many others, too... I was one of the few directors ever to work on 35mm film through to the end stages. Most people, even then, worked on video. So, all these years later, they cannot show their films as intended, due to changes in format and digital decay. Can you imagine Close To Me on a big screen??? Or Inbetween Days? Or The Cure In Orange? And others? It's possible! !" (Thanks Alan)

Maybe Tim hasn't heard that the Alamo Drafthouse Ritz has shown 'In Orange' in 35mm three times recently. And 92YTribeca has shown it at least once. No need to imagine, Tim. :) But a more widespread release would be very welcome! As would a Blu-ray release.
Posted by Craig at 2:12 PM 16 comments 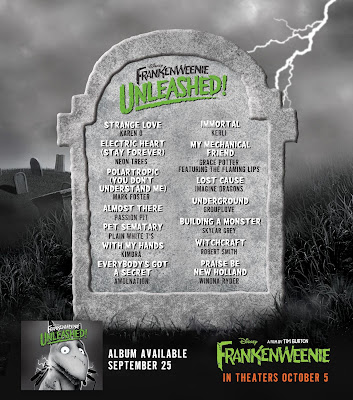 From Disney Music Alert: Robert Smith contributes 'Witchcraft' to Tim Burton's 'Frankenweenie Unleashed!' album, which will be released in North America on Sept. 25th. (Thanks Brad)

No idea yet if this is an original song or not, but just guessing it will be a cover of the old Frank Sinatra classic. At least I'm hoping it is, as I'd love to hear Robert's take on it. Much like his cover of 'Very Good Advice' on Tim's 'Almost Alice', this could be great fun!

See the glow in the dark album cover at Rolling Stone.

Update (Sept. 6th): It IS a cover of the Sinatra classic. Has a slow, big band/jazz combo feel to it. But not in the traditional sense. It is very slow, almost dirge-like. Imagine Tim Burton/David Lynch conducting the band. :) It's a bit jazzy, with a little swing, and a touch of the weird. Love the little piano bit. Hope that's Robert playing it. And really love his singing style! Reaction to it should be interesting. :)

Update (Sept. 25th): Now available in the US at Amazon and iTunes. Also, Amazon will have an exclusive vinyl version of the album, and that will be out on Oct. 30th.
For European (and other) fans who can't buy it yet, take a listen to it here. (Thanks hg)

The Cure's Facebook has been updated with news of today's release, yet once again, no mention of it on http://thecure.com . Somebody save the official site!
Posted by Craig at 4:11 PM 49 comments

Anyone need The Word in Toronto?

"So, if any Torontonians want an issue of "The Word" (with Robert on the cover and interview), there was 1 left last Tuesday after I bought my copy at Maison de la Presse at 99 Yorkville Ave. The owner said she had only gotten 3 copies and I'm assuming that was a while ago, so it might not be popular and might still be there. It cost me around $15." (Thanks Muldfeld)
Posted by Craig at 4:05 PM 2 comments