Paul Hartnoll of Orbital covers 'A Forest' live on Lauren Laverne's BBC Radio 6 show (starts at 02:10:00). This looks to be on an upcoming album, and also features The Unthanks.
(Thanks Stephen)
Posted by Craig at 6:12 PM 3 comments

"A day in the studio with Francesca Ter-Berg recording Orpheus and Eurydice, part of the Love and Other Tragedies suite for piano and four cellos..."

And from Roger on Facebook: "This Friday I will be recording cello with Jo Quail a very dear friend. She is playing the Tristan and Isolde act from the Love and Other Tragedies suite. Ive also booked the mastering studio for January 9th to cut the acetates with Guy Davie for the pressing. Looks like the premiere will be the middle week of April in London at St Leonards..."

And the recording is finished - "Well there we have it, recording finished for my new album project Love and Other Tragedies featuring on cello Julia Kent, Francesca Ter-Berg and Jo Quail with me of course on piano. Telling the three classic love tragedies of Scheherezade, Orpheus and Eurydice and Tristan and Isolde... Each story has three movements, a trilogy of trilogies and will be released as double vinyl on April 3rd 2014. ("Also digital download but not CD!")
Its taken a long time to finish and theres still some work to do but Im very happy with how it sounds right now and with Guy Davie's mastering genius and Anna Dorfman's art direction things can only get better.. "
Posted by Craig at 10:38 AM 3 comments

Readers of Rolling Stone Argentina have voted The Cure at River Plate Stadium, the Show of the Year. (Thanks bob)
Posted by Craig at 8:16 AM 1 comments

Article at NewStatesman: The Cure, the new Penguin editions of Camus, and the details of presentation. (Thanks David)
Posted by Craig at 11:03 AM 4 comments

From Amaze on Facebook: "We are extremely excited to announce that Robert Smith, lead singer of The Cure has donated a very special guitar to Amaze. The guitar will be auctioned by Bonhams in London on December 18th. All proceeds from the sale will go to Amaze.

The guitar is a Schecter 'Robert Smith RS-1000' signature model acoustic guitar in gloss black finish, with spruce top, maple body, and rosewood bridge, owned and played by Robert Smith, fingerboard inlaid with stars and moon motif. Lyric notes on paper for 'A Boy I Never Knew' are taped along top side with tuning instructions "DGCFAD" handwritten in silver ink, inscribed on the body by Smith in silver pen "I'd love to see him sleep, I'd love to know him dream... The Cure 2008" additionally signed later "Robert 2013", accompanied by a Gator hardshell case with black plush lining, with masking tape on the outside labelled in black pen 'A Boy I Never Knew, DGCFAD' and inscribed on the case in silver ink 'CURE 2008.

Amaze is very grateful to Robert and his family for this generous donation." (Thanks @guillaume_g_z)

Update (Nov. 25th, 2013): The guitar is up at the Bonhams auction site, and that prompted a very rare tweet from The Cure on Twitter.

From The Cure on Facebook, Twitter, and TheCure.com: "WOW! THANKS! RSX Lot 403 THE CURE: A SCHECTER RS 1000 GUITAR IN BLACK GLOSS FINISH OWNED AND PLAYED BY ROBERT SMITH, Sold for £27,500 inc. premium"

Perfect.Murder is at today's auction for the Robert Smith 'A Boy I Never Knew' guitar, and sends these photos and this video. He's obviously getting this for my Christmas present, but I'll pretend like I don't know that. :) 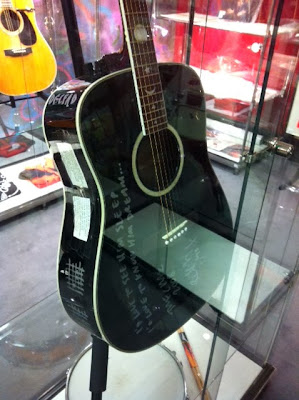 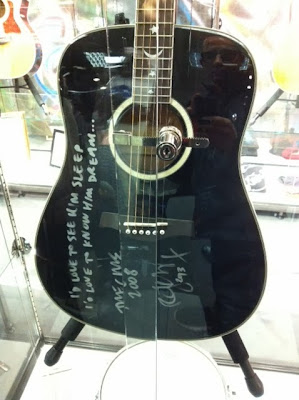 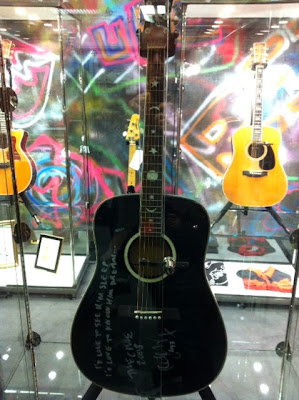 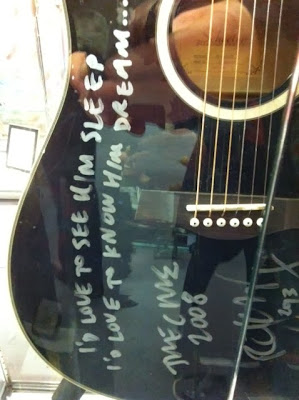 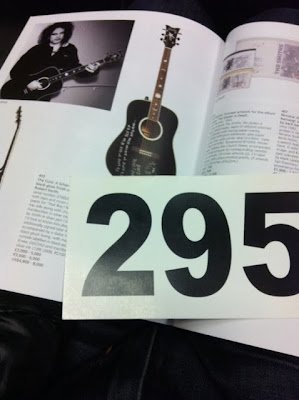