Cure Night in Cologne on May 30th 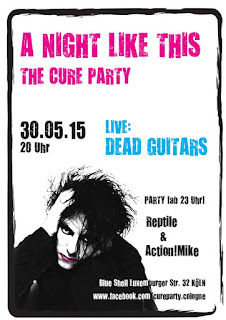 As in the years before, we are doing our annual cure all nighter again. Before the party, we have the great dutch wave rock outfit dead guitars playing live.

'Love and Other Tragedies' videos

Roger will be posting 9 videos to accompany 'Love and Other Tragedies'. Will update this as they are released.

From Roger on Facebook: "Well finally my new album Love and Other Tragedies recorded with the amazing Julia Kent on cello is finished. I mastered it last week in London and the lacquers are on their way to Holland to press the double white vinyl. We have a release date of May 29th on 99X/10 Records and Tapes and a premiere in London at St Leonards Church on May 30th. Performers are yet to be finalised but it will be a very beautiful concert whoever is playing! More details to follow....

Just to clarify, there will be only one (minute possibility of an LA show) show in London on May 30th and I will post pre order details as soon as I have them. Its a limited edition of 250 double white vinyl. Thanks for the interest, this is a very emotional record for me and I very much hope everyone connects with it."

Update (03/19/15): From Roger on Facebook - "OK, so the launch date and concert have been put back due to the pressing plant in Holland being very busy. The release date of Love and Other Tragedies is now June 26th with a pre sale on May 26th. The concert An Exquisite and Tragic Evening The Music of Roger O'Donnell at St Leonards in Shoreditch London will be June 26th. The concert will be free but you will need to register for tickets, this will also be launched on May 26th, tickets will be limited and available by email. Sorry for any confusion!"

Update (05/07/15): From Roger on Twitter: "Love and Other Tragedies my new album featuring @juliakent will premiere in London June 26th at St Leonards Shoreditch pre order June 19th. The concert will be free and include some very very special guests!"

Update (05/29/15): Out now on iTunes UK and US, and also available to listen to on Spotify. Roger has also updated his website with lots of great details on the recording and production of the album, and about the upcoming live show, which sounds like it will be quite a special evening.