'All Cats Are Grey' - Reflections Night 2


Another great video from Fujifezz! Doesn't matter, Lol, we love you! : ) And watch Fuji's 'Charlotte Sometimes', 'Primary', 'Holy Hour', 'Weedy Burton', and 'In Your House' clips, too.
Posted by Craig at 1:27 AM 35 comments

Some excellent clips from night 2 - Three (Happy Birthday) & The Final Sound / Doubt / Plastic Passion / Descent / Splintered in Her Head. (Thank you so much, Anonymous. Great job, as always!)

And if you missed the Anonymous videos from night 1, here's Secrets & It's Not You.

May 31st audio (sound rated at B+) posted at Fan Made Recordings. As always, if there's a problem with posting this, just let me know and this post will vanish. (Thanks Grinderman)

Audio: Fan Made Recordings (Thanks Grinderman)

Thanks again to Olivier and Bill for the updates!
Posted by Craig at 12:59 AM 212 comments 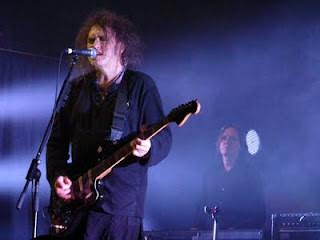 Robert & Roger at soundcheck (Thanks Anonymous)

From Roger: "Last night was incredible, thanks to everyone there and everyone not there... I felt like crying half way through A Reflection... Incredible.."

Photos of the stage setlists for Faith and the encores.
(Thanks Kelbel and Tim)

Audio: Fan Made Recordings (Thanks Grinderman)

A very Happy Birthday and Best Wishes to the eternally youthful Simon Gallup! Hope you had a great day and have an even better night! Cheers to you, Simon!
Posted by Craig at 12:01 AM 10 comments

Great report from Greg, about the gear the band used last night:

Observed from row 6 (J) of the stalls.

Robert:
- 3 Jazzmasters (1 sunburst for 3IB and associated encore songs, 1 white for 17S, 1 black for Faith and associated encores) Each guitar has an 'M' sticker on it. None have matching headstocks or 3rd 'Top 20' pickup. They all looked pretty pristine so maybe newly purchased?
- 1 Fender Bass VI black with matching headstock (looks like the one used in Trilogy with fewer stickers on it now)
- 1 red 2ble cutaway epiphone for JW encores (suspect this is the guitar he bought to record Lovecats with, and I believe is seen during this song in Cure in Japan 84 video but it's been awhile since I watched that)

2x Roland JC-120 amps for guitars and one for Bass VI. Usual array of Boss pedals. Guitar sounds were all wonderfully authentic unsurprisingly.

Simon:
- 2 Guild basses just like Michael Dempsey's. Very nice touch! 1 walnut w/ black pickguard which he used for all 3IB associated material and a black one for backup.
- 2 Fender Precision basses both black with black pickguards and maple necks. Almost certainly the original ones. The backup one had a white pickup cover.
- 2 Gibson Tbirds (his usual black one and a sunburst one for backup). Used for JW encores only.

2x Ampeg SVT heads and 2x Ampeg 4x10 cabinets instead of his usual 2x 8x10 cabinets. The bass was huge and full and rich sounding all night particularly with the Guild and Fender basses interestingly.

Roger & Lol:
Each had only a single keyboard rather than the double keyboard setup the Cure have used since 85. Manufacturer and model taped over, maybe Roland D50? Either way the sounds were all very authentic and MIDI from some ext source no doubt. Particularly impressive were the sounds Roger played during a Reflection, Secrets and The Final Sound. Both main keyboard rigs were placed in line with the guitar backline so set back from the guitarists for Faith although Roger had another keyboard setup inline with Robert and Simon for all of 17S which then was removed after that set.
(Update from Roger: "we were playing Kurzweil PC2xs and no midi all internal sounds that I programmed! Very difficult but what Robert wanted, some of the sounds were closer to the originals than ever!")

Hope this is interesting to technically minded COF readers! (Thanks Greg!)
Posted by Craig at 6:19 PM 33 comments

From Heron: "There's another CoF/Cure meetup at the Opera Bar again today starting at 4:30 pm. I have another banner blank that will say Happy Birthday Simon. Cure fans are welcome
to stop by and sign it - it will be given to him after the show."

And from Junko: "Please join in singing Happy Birthday to Simon. Start singing the moment Simon steps back on stage at the 1st encore! The more who join in, the better chance we'll all be heard!"

Have extra tickets for sale at face value? Email me or post details in the comments and I'll post them on the Tickets page for you.
Posted by Craig at 11:00 PM 58 comments

The Cure have arrived in Sydney!

May 30th (9:47 PM): Last minute ticket info from Xuan - "I went to the Opera house booth and asked if some tickets would possibly released. He said often, they still hold a couple of seats and release them during the day or possibly right before the show. So for anyone who is in Sydney, any hopes of getting tickets is to keep checking the front booth (dread). If the answer is it's still sold out, then come back again (rinse repeat)."

May 30th (9:21 AM): Grinderman sends a photo of The Cure rehearsing for the show! Photo by anonymous.

May 30th (12:26 AM): Olivier sends photos of Cure Reflections tickets, both SOH & Ticketmaster versions. He will also be posting thoughts, photos, etc. from the Sydney trip here. For those without Facebook, he has also given me permission to post his stuff here on CoF, so no worries.

May 30th (12:01 AM): Stephen Pavlovic talks to The Music Network about getting The Cure for Vivid.

May 29th (8:01 AM): Antti sends some photos of Vivid posters from around Sydney. Also, you can watch a live video feed (each night) of the light display on the sails of the SOH here.

May 28th (11:35 PM): From Lol on Facebook - "Great to be In Australia again ! Haven't been here in a long while! Getting ready for the "Reflections" shows. Really looking forward to this."

May 28th (11:32 AM): Qiong also got Robert, Simon and Lol to sign a vinyl copy of 'Faith' at the Sydney airport. More details posted here.

May 28th (8:33 AM): Here's a photo that Qiong took with Robert at Sydney airport and another brief clip of Robert in the airport.

May 28th (8:16 AM): From April - "Christina and I were walking near the opera house when we almost literally bumped into Simon, Jason, Keith and Jeremy. We were too shy to say anything but tailed them for a bit and then lost them ...i think they were onto us!"

Original post - May 27th (5:51 PM): The Cure have made it safely to Sydney, all systems are go, and Qiong gives us a report:

"I've been very lucky to catch up with the band this morning @ Sydney Airport. The band are in great shape although Roger complained the flight was too long.

Robert seems a lot slimmer than ever, seriously. Looks so much better. When he stepped out, the first spot of him made me think of his late 80s, rejuvenated ahhhh?? which is an awesome sign !!!

I've attached a far shot of Robert leaving in the van from Sydney Airport Parking lot.

I also uploaded a video I took this morning when Robert was stepping out the terminal." (Thanks Qiong)
Posted by Craig at 6:15 PM 73 comments