Firenze Rocks have announced The Cure as their first headliner for their 2019 festival. From their Facebook page:

The Cure are the first headliner announced by #Firenzerocks 2019!

• From 11:00 on Wednesday 2 October, preview via the official app of Florence rocks

• from 12.00 on Wednesday 3 October through general sale on > www.firenzerocks.it

Further information on prices and ticket types will be reported in the next few days
Posted by Craig at 8:11 AM 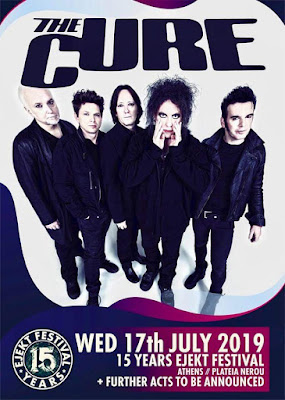 Ejekt Festival has announced The Cure as their first headliner for their 15th anniversary. More information and ticket details will be announced soon.

The Cure play 2 shows in South Africa in March 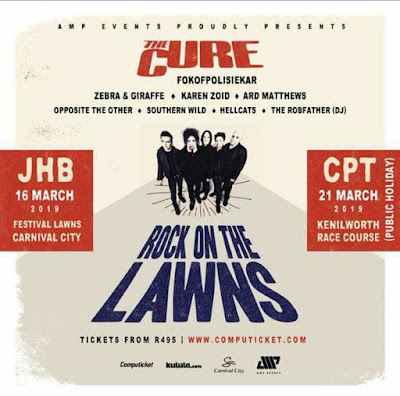 The Cure will be playing their first ever shows in South Africa, next March.

Tickets available here.
Posted by Craig at 8:00 AM

View this post on Instagram
🎃Window Clings, Pennants, print packs, and pin are on sale now at mlinehamart.com!!! Pick them up now!!! HAPPY HALLOWEEN!!!
A post shared by Matthew Lineham (@mlinehamart) on Sep 18, 2018 at 5:07pm PDT

Matthew Lineham has once again featured Robert in his Halloween decorations for this year. Window clings, art prints, pennant, all available here.
Posted by Craig at 7:58 AM

Michael Ciravolo will be talking about his 'Beauty in Chaos' project, which features Simon Gallup on bass for 'Miracle Man', on the Andy Cousins show today.
Posted by Craig at 7:56 AM


Pitchfork have revised and updated their 200 Best Albums of the 1980s list, and here's how The Cure fared:

The Cure’s sixth LP was also their big American breakthrough—a bright, crisp record nearly devoid of their signature swirling gloom. In this new light, Robert Smith’s dark desires took on positively cheery undertones, from jangly opener “In Between Days” and the eternal synth bop of “Close to Me” to the almost-disco of “Push,” which is basically Blondie viewed through a veil of distortion. It was the only one of the band’s albums to be entirely conceived by Smith, but far from being a hermetic affair, it veered outward, eagerly grabbing at new ideas. And with an added fifth member, multi-instrumentalist Porl Thompson, the sound was tighter and bolder, too. The brief, wondrous record marks a transition point in the Cure’s canon, a snapshot of a band making their way toward sprawling works yet to come. –Eve Barlow

The stylistic changes, the shifting lineups, the psilocybin and emptied liquor cabinets: Few acts had a more helter-skelter ’80s than the Cure. To trace a path from 1980’s Boys Don’t Cry up to 1987’s Kiss Me Kiss Me Kiss Me is to traverse punky perkiness, black-hearted resignation, foulest bile, insouciant psychedelia, and eyelash-batting pop. But it all comes to a head with 1989’s Disintegration—a sprawling double album that boils down all the Cure’s complexities into two contrasting shades of bittersweet.

Robert Smith’s love songs have never been as direct as “Lovesong,” a synth ballad as plain-spoken as a note left on a pillow, nor as evocative as “Plainsong,” a character study written with Raymond Carver’s sense of focus. If the album’s first half epitomizes the band’s unique fusion of melancholy and whimsy, the second half delves into their soul-scouring depths with surging guitars, storm-tossed rhythms, and Smith’s most desperate wails. “Fascination Street” and “Prayers for Rain” draw from the dirge-like moods of their early-’80s work while blowing that feeling up to acid-drenched proportions; like everything on the album, these two songs are intractable, improbable beasts, the kinds of echo-soaked anthems that made the Cure the decade’s unlikeliest alt-rock heroes. –Philip Sherburne

Now belatedly considered one of Robert Smith and company’s best records, not to mention a milestone in the genesis of goth rock, Pornography was nevertheless given short shrift by the critics. Its heavy, distorted guitars, Smith’s echo-charged vocals and bleakly emotional lyrics make for some truly uncomfortable listening, certainly when compared to the jaunty pop of the group’s The Head On The Door era. But hindsight is a wonderful thing.
Posted by Craig at 7:52 AM


From the AV Club:

The best covers have a reverence for the original song while adding a unique spin, offering new interpretation of a well-worn creation. My favorite example of this particular combo is Dinosaur Jr.’s version of The Cure’s “Just Like Heaven.” The original is a breathy, wispy take of a love lost at sea. But Dinosaur Jr. digs out the menace in the song, adding a ferocious beat to the “you” in the chorus, eventually ending on that frightening note (the band also hilariously chimes in only on the word “head”). And naturally, a trippy J Mascis guitar solo makes every song better. Not only did Dinosaur Jr. love this particular cover—the band recorded it for a compilation album, then refused to give it up, releasing it themselves—but it’s Robert Smith’s own favorite alternate version of the song. J Mascis sent it to him on a cassette, and Smith told Blender, “It was so passionate. It was fantastic. I’ve never had such a visceral reaction to a cover version before or since.” Smith says that the Dinosaur Jr. version even affects how The Cure now plays the song live.
Posted by Craig at 7:50 AM