Setlist: Tape / Open, High, The Walk, The Baby Screams, Push, In Between Days, Lullaby, The Caterpillar, Let's Go To Bed, Sleep When I'm Dead, Friday I'm in Love, Doing the Unstuck, Pictures of You, Lovesong, Just Like Heaven, Boys Don't Cry, From the Edge of the Deep Green Sea, End

3rd encore: The Lovecats, Hot Hot Hot, Close to Me, Why Can't I Be You?

Thanks so much to Warren (@waswasere) for the set reports.

Lol in the UK

Just arrived in the UK for the CURED book tour !! pic.twitter.com/oiJHNvVxt2

Chilling for a couple of days, with another imaginary boy, until the start of the CURED book tour In the UK!! pic.twitter.com/wUERaSRT6v

Update (Sept. 9th, 2016): Wow! After only 1 day, the campaign is already at 57% of his goal! Well done! And Lol says he will be announcing the exact dates and venues for the US tour on Monday.


Lots of rare and exclusive items in this campaign, so be sure to check it out! Also, notice that Pearl will be attending select 'Cured' events!

"For the release of his new memoir Cured: The Tale of Two Imaginary Boys, Cure co-founder Lol Tolhurst teamed up with bandmate/graphic artist Pearl Thompson to create exclusive new artwork for 2 different versions of the book’s cover and an exclusive PledgeMusic range of Cured t-shirts, posters, pins and more….

Pearl’s original designs were utilized by LA-based craftsman Brennan Wheeler as the basis for limited-edition presentation art boxes. Each box contains signed copies of the book, and some rather special additional Cured items.

Most excitingly of all, Lol has also opened up his personal archive for the first time to sell some one-of-a-kind items of memorabilia straight to you, the world’s biggest Cure fans. All memorabilia will be accompanied by signed letters of authenticity and a photo of Lol with the item itself.

The proceeds from this PledgeMusic campaign go to fund The Cured Book Tour. Throughout a series of special events, Lol will read key passages from the book while surrounded by an immersive audio/visual backdrop, and also conduct a fan Q&A and signing session. On select dates, he will also be accompanied by Pearl Thompson and exhibitions of original artwork.

Follow this PledgeMusic campaign to be the first to get all the details of all the Cured book tour dates…"
Posted by Craig at 1:01 PM 21 comments

Paste has a list of their 50 Best New Wave Albums, and 'Disintegration' is #10.

10. The Cure – Disintegration (1989)
Disintegration is a return to goth glory after The Cure’s foray into pop with 1987’s Kiss Me, Kiss Me, Kiss Me. It’s lush, mournful and gorgeous—in other words, it’s Robert Smith and company at their very best. From the first notes of “Plainsong” to the somber romance of “Lovesong” and the sweeping “Fascination Street,” the album is emotional but never overwrought. Smith surpasses hokey teen angst, instead creating a lasting work that’s entirely relatable. As the 1980s came to a close, this was the perfect ending to New Wave’s moment in the sun.—Bonnie Stiernberg

From Reeves on Facebook: "I am offering a guitar master class to benefit Ashden, an international charity focused on environmental health. Bid now thru their Sept 15th event in London."

Also, if you attend the live auction at Party in the Park at LookOut in Hyde Park on Sept. 15th, you can bid on a drum lesson from Jason. (Thanks Anita)
Posted by Craig at 8:54 AM 2 comments 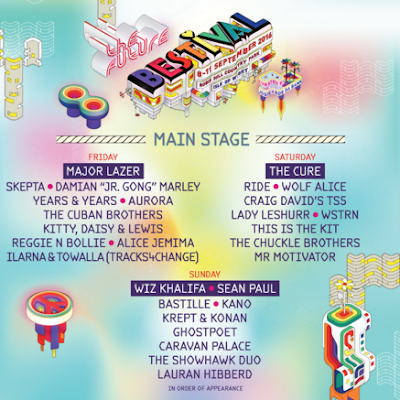 There will be a live stream from Bestival, and the first group of acts to be streamed has been announced, but so far, no Cure. We do get Ride, though.
Posted by Craig at 5:11 PM 3 comments

"Lol Tolhurst has now spent more years outside of the Cure than within the band that he formed with Robert Smith when they both were still at school. He was that young 15-year-old boy who played drums while his buddy Robert was on the piano. Together they played their first gig ever at their school in Crawley at the end of the year. And he's also that very boy who grew up travelling the world, playing from the smallest venues to the biggest stadium audiences ever.

While some artists may fly too close to the sun and are brought down to the ground when success hits along with its collateral damages such as drugs, suicide, nervous breakdown, Lol survived it all, but drank all of his energy down the bottle, losing his own soul, then becoming nothing but the shadow of himself. If not killing him, alcohol took everything from the person he was at 15, leaving Robert Smith with no choice but to exclude him from the band in 1989, right after the release of "Disintegration", a record that he was barely involved in.

Twenty-seven years later, twenty-seven years without any alcohol at all, Lol is totally clean. Clean in his mind, in his life, in his own projects. He's saved. He escaped. Since his departure from The Cure, Lol has released an album under the Presence moniker back in 1993 (with a second album released in 2014), then three more albums with Levinhurst, the project he's been successfully leading with his wife Cindy Levinson since 2004. Lol gave himself a new life, both in human and artistic ways.

Nowadays, he states that he really wouldn’t mind rejoining The Cure, as the band has not only been a big part of his life but he himself is a genuine part of The Cure."

Read the interview at Premonition - English / French.
(Thanks Frank)
Posted by Craig at 7:08 AM 6 comments

You had questions for Lol, and he's provided the answers. While the original thinking was that Lol would answer just 10-15 of them, he answered every single one! So here's Part 1. Part 2 will be posted next Tuesday, Sept. 13th. Thanks once again to Lol for doing this, to Quercus Books for arranging it, and to everyone who sent in questions.


From Pierre: What is your best memory with The Cure? The one you cherish more than the others.

LOL: I have many, probably too many to single out one, but I remember the first time we played in Los Angeles, California, as young men and the last time I played with The Cure at the Albert hall in London in 2011 as being especially good experiences.

From All_I_have_to_do_is_kill_her:
Are there any unreleased songs from Pornography?

LOL: Not that I recall! It was an intense album to make, all our energy went into the songs, not much left over really. Plus we were on a roller coaster of tour /album/ tour so that doesn’t leave much time to write extra stuff you know?

How did you feel when you were performing "the cure are dead" with Gary biddles on the last pornography date. And what were your thoughts when you found out Simon was no longer with the cure. Also how did you feel when you were recording without him as he was a very significant part of the cure and also a key contributor to the cure musically. I would also like to know how you and Robert as well as simon felt when he came back. Also thanks for pissing on Billy idols leg he is a tool

LOL: It was a really sad night but at the same time inevitable. We had spent so much time on the road for years, we were overwrought! I explain my feelings about all this in my book.

From Sang: Did deciding to no longer play drums in the Cure impact your self-identity within the band?

LOL: Yes and no. On one hand I was very interested in discovering new things to do musically and on the other hand I loved the mantra of the drums and rhythm. My identity, I felt was more to with being a partner in the thing we called the Cure which means I played drums and keys and wrote some lyrics and lived the life that is the Cure.

From sky went black:
Do the lyrics of One Hundred Years refer to the death of your mother? Did she pass away when you were young? How did you take that?

LOL: The lyrics to “All Cats are Grey” are more specifically about my mother’s death. At the time of Pornography we had several deaths in the group. Roberts grandmother passed away I believe , and my mother. I was 22 when she died and it had a devastating effect on me. Art is a way to cope sometimes with the world.

Why did you move to United States? What do you miss about England? Will you ever move back?

LOL: I wanted to be a stranger in a strange land after the Cure ended for me and I also had great memories of being In California as a young man. On a practical basis my son was here too so I moved to the USA permanently. I miss my friends in England so I try to visit them at least once a year; they often visit me too here in California. The weather’s better! My son lives here still and I am happy here so I won’t move back full time.

How many kids have you got? Are you married? For how long? Been married before?

LOL: I have one son: Gray, he’s twenty four, a musician and poet and lives in San Francisco. I was married first to Grays’s mother, and then we divorced. I have been married to Cindy for the last 19 years. My first wife passed away a few years ago.

Do you have a big learning of life you want to share?

LOL: I think that’s really what my book is about. I feel it would be difficult to sum up in one or two phrases what I had learnt. So I wrote a book instead.

2 more photos from Lol Tolhurst's personal collection, never been published before (we think!) and not included in 'Cured'. A nice bonus for CoF readers. All photos are by Richard Bellia. Thank You to Lol for sharing them with us, and to Quercus for providing them.

Lol's answers to your questions will be posted very soon, hopefully today.