As many of you know, Daryl Bamonte has formed a band, Compact Space, with Florian Kraemmer and Christian Eigner (drummer with Depeche Mode). They are now on Twitter, @_compactspace, and will have an announcement on April 26th. (Thanks Roger)
Posted by Craig at 9:18 AM 5 comments

Update (April 14th, 2011): Some outtakes from the film have been posted on YouTube. Also, the film will be in competition at the Cannes Film Festival. (Thanks Marco and Luca)

Update 2 (April 15th, 2011): The Playlist, Consequence of Sound, and TwentyFourBit have stories about it.

Original story (March 1st, 2011): As most of you will remember, in Sean Penn's new film, 'This Must Be The Place', director Paolo Sorrentino says he based the look of Penn's character on Robert Smith. David collected a bunch of photos of Sean filming the movie, so here they are. I don't know, looks like a little of RS, mixed with a lot of classic Wayne Hussey, to me. (Thanks David)
Posted by Craig at 10:14 AM 13 comments

From Roger's newsletter: "I had a meeting with Gill Tarlton who is head of strings at the Centre For Young Musicians. We discussed the performance of my suite "Quieter Trees" and how it would progress. I met the arranger John Kirby on that Saturday and we now have a tentative date of Juy 2nd 2011. I personally believe this will be a career topping moment for me and I would so love for as many of you to come as possible. I wont be performing so I can enjoy it with you. I would just love to share this amazing special day in my career with everyone that has supported me for so long. I will let you have more details when I know. I am going to be filming the whole process for possible DVD release.

In the midst of all this I agreed to two more shows, one on the boat in London again which is called Ship of Fools on Sunday June 5th and the second at the WGT festival in Leipzi Germany. The show in Leipzig will also have Jo Quail my friend and an amazing cellist performing also Alan Wilder from DM with his Recoil project.

Lastly I have finally made the Synthesist T shirt that I have been talking about for ages!"

And from Twitter today: "Quieter Trees debut performance by the CYM String Orchestra confirmed for July 2nd in London at the Morley College!"

Congratulations, Roger! Could not be happier about this for you!

Original story (Oct. 20th, 2010): "With the 30th anniversary of Faith coming up in just a few months from now, and Lol's comments recently about thinking it would be fun to do some 30th anniversary shows for the Faith album with the original line-up, I had an idea and spent 10 minutes making this petition today.

Triple J radio in Australia recorded The Cure's Sydney 1981 show, a great show and best sounding recording of the tour (I'm sure you know the version of Faith on the Charlotte Sometimes 12" b-side).

Over the years Triple J has played the odd song here and there, I made this petition to ask them to please broadcast the whole show in full, what better time to do it than for the 30th anniversary!"
(Thanks Brent)
Posted by Craig at 10:16 AM 8 comments

Virtual Festivals reports that Bestival will be filmed, and broadcast, in 3-D.

Update: It will be live for 2 hours each day, 7 & 1/2 live hours total, and a 90 minute special after the ed of the festival. More details here, here, and here. (Thanks Perfect.Murder)
Posted by Craig at 11:45 AM 9 comments 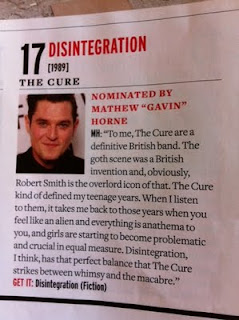 'Disintegration' comes in at #17 on Q magazine's 50 Ultimate British Songs in their March issue. Full list here. (Thanks Perfect.Murder)
Posted by Craig at 11:58 AM 2 comments