Cure on Rage in Australia

Update 2: Here's the video. (Thanks Explodingboy)

"There’s a show on Australian TV on ABC called Rage and this Saturday night(30/01/10), they will replay an old program called Studio 31. This is what their twitter feedsaid about it: “Just unearthed a show called Studio 31 - it's 1980s Countdown performances! Don't think these have been seen in decades... - performances from Adam & The Ants, Status Quo, The Police, The Ramones, The Village People, Cheap Trick, The Cure...” Apparently Rage (which is an all night program) will open with the replay of Studio 31…" (Thanks Marc)
Posted by Craig at 10:45 AM 26 comments

Close To Me in Hot Tub Time Machine

"Hot Tub Time Machine is set in 1986 and features many great songs from that year. Among them is 'Close to Me' in the scene when John Cusack breaks into a house with this girl he met and they hang out 'Sixteen Candles' style. You'll understand more once the film gets released in March. Hilarious, definitely recommend it. Saw an advance screening tonight."
(Thanks AndytheCurefan)
Posted by Craig at 10:42 AM 10 comments

Fan effort to make A Forest #1 in UK charts

"A fan on Facebook has set up an event to get “A Forest” to number 1 on the week of Robert's birthday."
(Thanks Aaron and Danny)

Update: And if you really care about any of this, fans of The Smiths and Girls Aloud are also attempting something similar in Feb.
Posted by Craig at 3:36 PM 25 comments

"Just started watching the promotional video about new Apple iPad and at 01:15, there's a piano interpretation (by Ben Folds) of Inbetween Days in the background." (Thanks Theresa, James, Jason, Goshmac, Bryan, JP, and Chrissy)
Posted by Craig at 3:29 PM 28 comments

"With a lot of happiness and excitement I let you know there is a new CURE fan page made by some Mexican fans. It was made with the huge love and passion that we feel for the band." (Thanks, congratulations, and best of luck to Mad Bob and the other great Mexican Cure fans)
Posted by Craig at 3:05 PM 4 comments

Cryfest: Cure vs. Smiths in DC 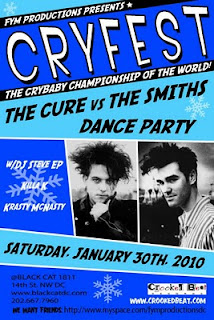 http://www.myspace.com/fymproductionsdc (Thanks Yanic)
Posted by Craig at 3:01 PM 5 comments