Nice interview with Roger at Tomatrax.

And Roger interviews Roger.
Posted by Craig at 11:38 AM 0 comments

From Reeves on Facebook: "If you missed the Reeves Gabrels Birthday feature on Strange Currency, KMUW radio, it is available for listening in the show's Archive (Thur 4 Jun) at kmuw.org/programs/strange-currency."

Happy Birthday, Reeves! Hope you had a great day!
Posted by Craig at 11:05 AM 0 comments 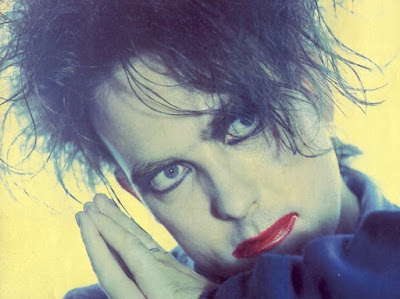 From High Snobiety: "While there are myriad rock stars who pushed androgynous aesthetics – from KISS’s outrageous circus of hair and leather to Alice Cooper’s out and out gender bending, it’s cult Goth figurehead Robert Smith whose legacy in androgynous dressing that still echoes today. Smith’s trademark image of smeared lipstick, eyeliner, pale skin, messy black hair and all-black getup would define the Goth aesthetic and matched the Cure’s gloomy, sombre music perfectly, and while the Cure frontman hated his band’s connotations with the Goth movement, designers are still drawing on the Goth aesthetic to this day." (Thanks @godwinafaith)
Posted by Craig at 7:35 AM 16 comments