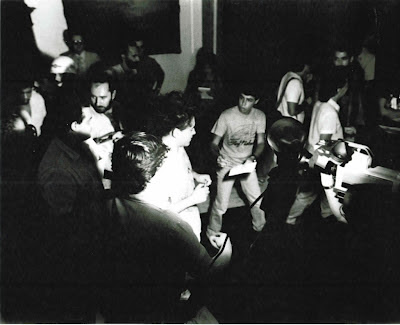 "As another fan told us about his 25th year of his first Cure Concert, I am sending pictures of mine in March 1987.

Here is a picture of my first close encounter with them. This picture was published in our local newspaper back then, and I remember as if it happened yesterday.

I went with a couple of friends to the airport, but did not get in touch with the band. So, we ran to the best hotel in town. When we got there, the band was heading in to the hall, with tons of fans and press right behind them. I managed to pass them by the side, and got in front of Robert.

This is the exact moment were i am turning around and asking him for an autograph! You can imagine how happy i was!!! Even more meeting them almost 25 years after in Milan this year!!

I still got them, with the signature of the rest of the band!

Here are some pictures taken from the first Cure performances in Brazil, in Porto Alegre, March 1987. I bought them from a local newspaper." (Thanks Luciano)

"Have you ever heard about this? It's a huge pub in Seoul (Hongdae) called "The Cure" with pictures and posters of the band (and of a few other British bands) all over the place and on TV screens. The place looks insane! Look at the Gallery here, more pictures here." (Thanks Olivier)
Posted by Craig at 11:13 AM 4 comments

Rob da Bank spoke to Q Magazine about how he discovered The Cure and his love for 'Disintegration'. (Thanks Aaron)
Posted by Craig at 10:48 AM 1 comments

Clash of the Titans: The Cure vs Radiohead Live

The Quietus went to Bilbao BBK Live, and takes a look at who had the better set between The Cure and Radiohead.
(Thanks Mike and Darrell)
Posted by Craig at 10:10 AM 8 comments

From Roger on Facebook: "Brief news update; the Requiem DVD should be available for order from August 1st. It won't be numbered but will include Day and Night the two extra pieces of music Adam and I wrote for before and after the performance. I think its going to be £15 inc p+p but may be less.."

More of a Perryspotting, but there's this from a profile of Perry's wife Donna: "And there aren't many amateur jockeys who are married to rock stars. Donna's partner is Perry Bamonte, formerly of Goth band The Cure, who until he met Donna four years ago was enjoying some quiet seclusion. "No one knew who he was," said Donna. "There was even a rumour a devil worshipper had moved in to the house! Once we got together, then everyone knew who he was. He says I made him famous!"
(Thanks @CrimsonTonight)
Posted by Craig at 10:00 AM 12 comments