Could not be happier for Reeves and Susan, on this, their wedding day! Wishing you a lifetime of love and happiness together! Hope you have a beautiful day! Cheers!
Read their wonderful story from the New York Times: 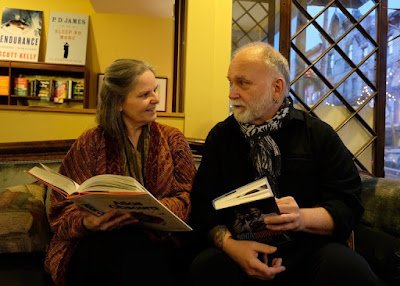 ‘Maybe in Another Life’ Becomes Now

Susan Van Wie Kastan and Reeves Gabrels are to be married Jan. 7 in Saratoga Springs, N.Y. The Rev. Joy Burke, an interfaith minister, is to officiate at her home.

The bride, 62, will take her husband’s name. She is a marketing communications consultant in Troy, N.Y. She was also a contributor to “Philanthropic Foundations: New Scholarship, New Possibilities,” (Indiana University Press, 1999). She graduated from Dartmouth and received a master’s degree in history and education from Columbia.

The groom, 61, has been a guitarist in the British alternative-rock band the Cure since 2012. He also has his own band, Reeves Gabrels and His Imaginary Friends, and released an album, “Imaginary Friends Live,” in October. Before joining the Cure, he had a longtime collaboration with the late David Bowie, with whom he worked as a guitarist, co-writer, co-producer and musical director. Ms. Kastan is the business manager for her husband.