The Teenage Cancer Trust's Unseen Youtube channel has been adding a bunch of clips from the 2014 show.
Posted by Craig at 8:32 AM 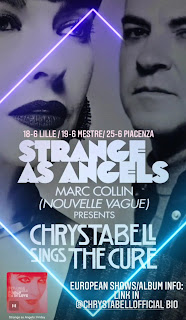 CoF blog is back!

CoF blog is back starting today. Don't know for how much longer or how frequently it will be updated, but for now, it's back. CoF Twitter is still the place for all of the instant updates, but will keep this updated as often as possible.

The Cure frontman Robert Smith has addressed his history with Morrissey and The Smiths, labelling their disagreements an “imaginary feud that happened 20 years ago”.

Smith spoke to The Sunday Times‘ writer Jonathan Dean recently, in a joint interview with CHVRCHES‘ Lauren Mayberry. The pair mainly discussed their collaborative single ‘How Not To Drown’, however, Dean took to Twitter to share outtakes that didn’t make the final published interview.

One outtake posted yesterday (June 13) sees Smith discuss his ongoing tension with Morrissey and how, according to Dean, the internet “he felt that the internet was spiralling their spat out of control”.

“With Morrissey, I got a flurry of [backlash from the public]. And I thought, ‘what does it matter?’ This imaginary feud that happened 20 years ago,” Smith stated.

The alleged war between Smith and Morrissey spans back to the 1980s after Morrissey called Smith a “whingebag” in an interview with The Face. The Cure frontman then retaliated by saying “Morrissey’s so depressing if he doesn’t [off] himself soon, I probably will,” according to Far Out Magazine.

This back-and-forth continued on for another two decades, with Smith describing their history as a “petty feud” in a 2004 interview with US magazine Entertainment Weekly.

“I didn’t really like The Smiths particularly,” Smith admitted to Dean. “They were competition for a very brief period. But more than that, I didn’t connect with it. I didn’t dislike them on a personal level – I didn’t know them.”

“It never really got to me and then in later years it was this set up and I thought ‘why?’ And so since then I’ve realised how easily these things can spiral because people want it to be something. They’re desperate for it to be some sort of soap opera.

Back in 2019, Morrissey apologised for his part in their war of words in the ’80s.

“I said some terrible things about him 35 years ago… but I didn’t mean them,” he said. “I was just being very Grange Hill. It’s great when you can blame everything on Tourette’s syndrome.”

Responding to his apology later that year, Smith told NME: “It was slightly odd as I haven’t really had it at the forefront of my consciousness over the last 20 or 30 years. I don’t know. Even at the time I never quite understood what the problem was. It’s far from important now

Elsewhere in The Times’ interview, Robert Smith revealed he thinks The Cure’s next album will be their last.

“The new Cure stuff is very emotional. It’s 10 years of life distilled into a couple of hours of intense stuff.” Then adding: “And I can’t think we’ll ever do anything else. I definitely can’t do this again.”

Robert Smith on new Cure LP: 'I can't do this again'

The Cure's front man Robert Smith has revealed that the veteran rock band’s next album will also be their last.

Speaking in an interview alongside Chvrches lead singer Lauren Mayberry, Smith shared details of the long-awaited new album from The Cure.

"The new Cure stuff is very emotional," he told The Sunday Times. "It’s 10 years of life distilled into a couple of hours of intense stuff."

He then added: "And I can’t think we’ll ever do anything else. I definitely can’t do this again."

In a recent interview with Zane Lowe, Smith spoke about the two albums, mentioning that one is notably darker than the other.

Smith also told Lowe that he will have more updates soon.

"Probably in about six weeks’ time I’ll be able to say when everything’s coming out and what we’re doing next year and everything," he said.

"We were doing two albums and one of them’s very, very doom and gloom and the other one isn’t.

"And they’re both very close to being done. I just have to decide who’s going to mix them," he added. "That’s really all I’ve got left to do."

Strange As Angels' Friday I'm in Love video on Wednesday

The video for Marc Collin presents Strange As Angels - @Chrysta_Bell Sings The Cure's cover of Friday I'm In Love will be released this Wednesday. And the album will be released this Friday, June 18th. CD and vinyl can be pre-ordered @DiggersFactory. https://t.co/sL37aMnhdx pic.twitter.com/58H57lqQi2