"Just a quick note to let you know that Arte will show a 75 minutes highlights of the Vieilles Charrues Festival 2012 tonight at 00:15 French time. The Cure are scheduled, but no details about what they will show." (Thanks Sylvain)
Posted by Craig at 9:39 AM 4 comments

OUR PROMOTER TELLS US:
Both Cure RAH shows for TCT are SOLD OUT! However, agents may return odd tickets as they sweep for touts/multiple bookings; so periodically over the next week or so tickets will likely appear on either gigsandtours.com or Ticketmaster.com. Also, nearer the dates of the shows some 'debenture holders' will probably donate their seats to the charity, meaning a few more tickets will appear for sale in March, right up until the day of the show. I’m letting you know this not because we need to publicise, but just in case you wonder why every now and then someone is able to buy a ticket and posts about it on Facebook! Please keep checking back with gigsandtours, and thank you again for your wonderful support of Teenage Cancer Trust.

On a related note, article in the Daily Mail about the touts and their cashing in. (Thanks @AaronLaw92)
Posted by Craig at 3:18 PM 5 comments 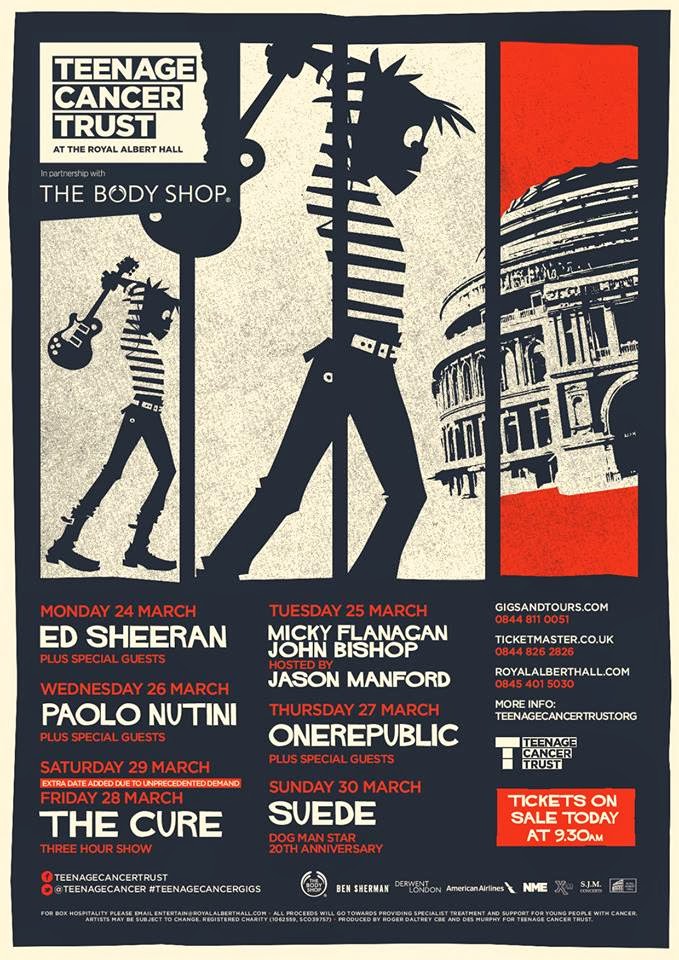 "One of the UK’s most influential bands, The Cure will play an exclusive 3 hour show on Saturday 29 March. "

Robert Smith: “The Cure are once again delighted and honoured to be playing the Royal Albert Hall for the benefit of Teenage Cancer Trust.”

Update: Fan pre-sale today (Jan. 30th) at 9 am here. Good luck!
Looks like we are 'beating the touts", as numerous fans are reporting that they were able to get tickets. Excellent! Congratulations!

Update: 2nd show added on the 28th. Tickets on sale now. Looks like nothing went on sale for the March 29th show. They really did release everything in the pre-sale. Hope you didn't wait for today. Both shows are now sold out.

From JC/Perfect.Murder: "First in line at the RAH Queue"

Lisa Loeb with Roger at NAMM. There's apparently some story about Lisa & her sister kidnapping Roger in Dallas, TX during the 1987 Kissing Tour. Hope we get to hear about that some day. :)

In other Roger news...


Yes I'm in LA working primarily on finishing the music for our ballet production and on a couple of very interesting film projects!

Well this one is a bit odd, but it seems 'Greatest Hits' has re-enterd the UK album chart and is doing quite well. It re-entered at #72 a few weeks ago, and has now climbed to #37. Its highest previous position was #33 in its original release week. Anyone have any idea about this? Cure getting a lot of UK radio play suddenly? Featured in some TV shows? (Thanks Matt)

Update: The reason why it's doing so well looks to be due to Tesco selling it for 75p. (Thanks mangosteensoundcorporation)

A Cure fan at the NY Times?

With a headline like this, "Loehmann’s, Out of Step and Closing Down", I'm going to have to say yes! If not, that's a hell of a coincidence. (Thanks @magicjewball)
Posted by Craig at 7:37 AM 2 comments