Note: This was originally posted on July 25th, 2012. No reason for reposting now, other than another trip down "Cure at Lakefront Arena" memory lane. Thanks for indulging me. We start creating new memories tomorrow! 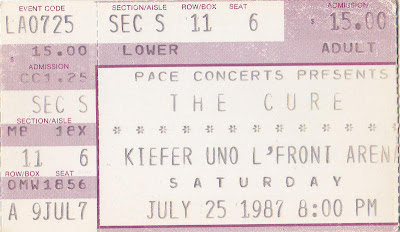 Setlist: The Kiss, Torture, All I Want, A Japanese Dream, Catch, Just Like Heaven, Hot Hot Hot!!!, If Only Tonight We Could Sleep, Like Cockatoos, The Walk, In Between Days, How Beautiful You Are, The Perfect Girl, The Snakepit, A Forest, Fight

1st Encore: Close to Me, Let's Go to Bed


It was 25 years ago tonight that I saw The Cure live for the very first time. And for only $15! My seat wasn't the best, but not bad for buying tickets just 2 weeks before the show. Thanks to mom for buying it for me at the Maison Blanche in the Oakwood Mall. 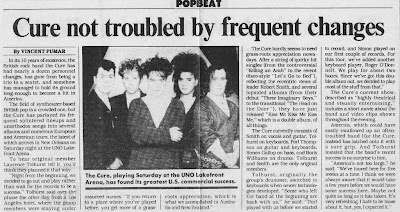 I know this isn't news, but it means a lot to me, and brings back some pretty good memories. While I was much more of a Smiths fan at the time (Morrissey was my hero, my icon), this show really opened my eyes to the fact that The Cure were much more than some quirky British band that made goofy videos. They were an excellent live band, one of the best I had seen. A belief that would be forever solidified in just 2 short years, when I'd be blown away, while standing alone at the bottom of a hill in Dallas, Texas, at my first show on the Prayer Tour.
Posted by Craig at 6:48 AM