UK post-punk legends The Cure are coming through town May 10-11 for a two night stand at the UNO Lakefront Arena. The Cure remain an outstanding live band. Their headlining sets often stretch to three hours and include a mix of hits and deep cuts. Whether you’re a longtime fan or casually interested, this is one worth seeing.

From Keith Spera at The New Orleans Advocate:

Goth-pop didn’t get much more melodic than that of The Cure. Singer-songwriter Robert Smith, a poster boy for the permanently pale, and his collaborators churned out a long string of irresistible tragic-romantic singles in their 1980s heyday: “Boys Don’t Cry,” “Close to Me,” “Just Like Heaven,” “Lovesong,” “Why Can’t I Be You,” “Friday I’m in Love,” “The Love Cats,” “Pictures of You.” Smith and company occasionally reconvene to hit the road. Following an extremely well-received show at the 2013 Voodoo Experience, the Cure will launch their 2016 North American tour with two nights at the Lakefront Arena. Tickets for the arena floor are standing-room-only general admission; balcony seats are reserved. The Twilight Sad is the opening act for both nights.

From The Times-Picayune's Lagniappe section (May 6th, 2016): 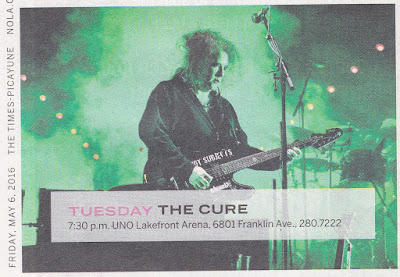 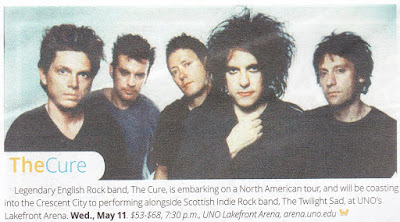 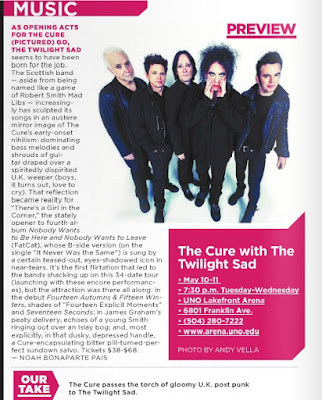