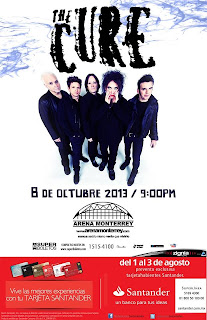 We all suspected there could be some "Inbetween Shows" during ACL week, and here's the first of them. Not confirmed by Robert at the official site yet, but it should be soon.

Update (07/30/13):  Here's the unofficial "official" announcement. The Cure plays Monterrey Arena in Monterrey, Mexico on Oct. 8th. Santander presale starts Aug. 1st at 10 AM and will run until Aug. 3rd.

Also now confirmed on the Monterrey Arena Facebook: "Confirmed! The Cure returns to the Arena Monterrey on October 8. Pre-sales #Santander from 1 to 3 August. Range of tickets: from $325 to $1,370 pesos."

And here's the seating chart with the various price points. Good luck to everyone trying to get tickets.

Update (08/01/13): Presale tickets are on sale now. If that link doesn't work, just get the link from here. Note that this is a presale for Santander customers only. General public sales start on Aug. 4th.

Update (08/05/13): General public tickets on sale now. Still not a single word about this show and ticket sales on any official Cure site.
Posted by Craig at 8:56 AM