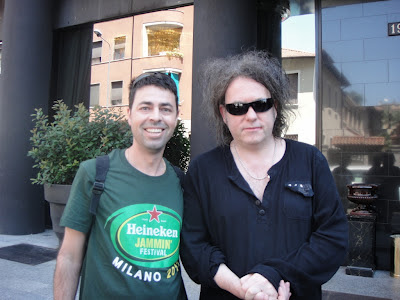 "The day after the show in Milan, after some sightseeing, i was getting back to the hotel to pack and fly to Rome, when i saw the band leaving the hotel. It was the same hotel i was in!!! And i did not notice aything different there before!

So, i caught Robert, thanked him for the amazing concert and asked for a picture. After that, saw another van. Went there and there was the rest of the guys! Thanked again for the concert, took a picture and told Simon i was from Brazil and was going to attend 4 concerts (Milan, Rome, Bilbao and Lisbon). He was so surprised! He even thanked me for what i was doing!!!!