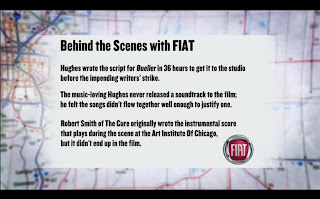 "I was just watching a video from the Onion's AV club and at the end it says that Robert wrote a score for a scene in Ferris Bueller, but they decided not to use it. I'd never heard of this before and figured I'd share with you." (Thanks Steve)

Update: Thanks to Deadboycraved for pointing this out...In the 'Disintegration' deluxe booklet, Robert mentions being sent various movie clips from studios, hoping to get him to write music for them. And in Mojo's review of the set, they say that 'Ferris Bueller's Day Off'' was one of the films he was offered, though it doesn't say he wrote anything for it. Very interesting. If this truly exists, I'd love to hear it.