Good news for those who were hoping to be able to buy their own version of Simon's new yellow bass, Schecter has plans to do a limited run of them, starting Jan. 1st, 2017.

The bass was designed by Nancy Dorothy Wakeman, and she posted some info on her design here:

"The Cure are currently out on a year long world tour. Earlier this year, I was comissioned by the bassist, Simon Gallup, to help him design a new bass, exclusively for this 2016 tour. He had a vague idea of what he was after, he wanted some kind of English lion, a rose, and it absolutely had to be yellow!

The illustration style of the lion is intended to resemble a woodcut print, this was a decision I made in order to give the lion a sense of age and history." 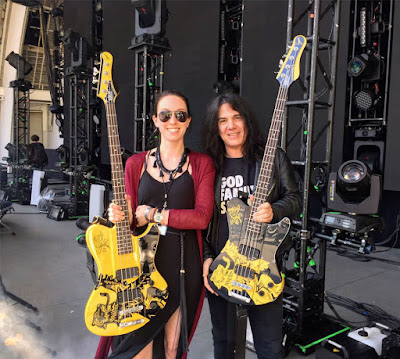 Nancy & Michael Ciravolo, president of Schecter and native New Orleanian, at the Hollywood Bowl show on May 22nd, 2016.