Update: "The director of the movie is Paolo Sorrentino. In an interview he said that for the rock star character played by Sean Penn, the inspiration was Robert Smith, leader of The Cure. "When he came to Rome, I went to see him in concert. Lipstick on the lips, punk hair, fifteen-year-old look and he is 50 years old instead. He doesn't have a cell phone, he doesn't drive a car, he has stopped the time to 1988." (Thanks fmjews) 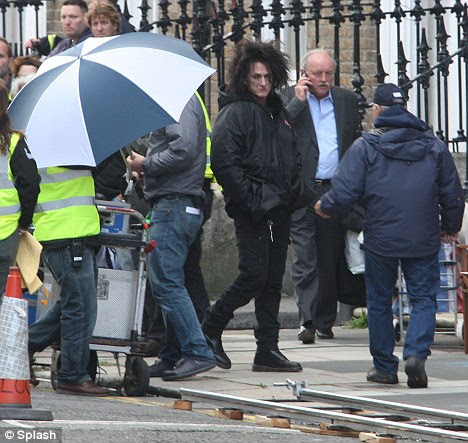 From The Daily Mail: "with his red lipstick and wild hair, Penn looked more like 51-year-old Cure frontman Robert Smith than a Hollywood actor as he filmed on location in Dublin's Mount Street." Here's another photo, and here's another.
(Thanks April, John and Kate)
Posted by Craig at 11:49 AM