Setlist: Plainsong, Open, Fascination Street, A Night Like This, The End of the World, Lovesong, Just Like Heaven, The Only One, The Walk, Push, Friday I'm In Love, Inbetween Days, Play For Today, A Forest, Primary, Shake Dog Shake, The Hungry Ghost, 100 Years, End, Disintegration.

1st encore: Lullaby, The Lovecats, The Caterpillar, Close to Me, Hot Hot Hot, Let's Go to Bed, Why Can't I Be You?


Show Notes & Photos
Sky Arts setlist 09/10/11 (what aired on tv): Lovesong, Just Like Heaven, The Only One, The Walk, Push, Friday I'm In Love, Inbetween Days. (Thanks to thesmudge for the reports)
Update: Play For Today & A Forest were aired on the 09/11/11 broadcast.

From Perfect.Murder: "Roger threw his tambourine, guess who got it?"

From Olivier: "Robert started encore with showing off his new "Bestival" guitar that "weighs more than a fucking car!"

From SkyArts: Live footage of The Cure will be shown on tonight's highlights from 11.36pm 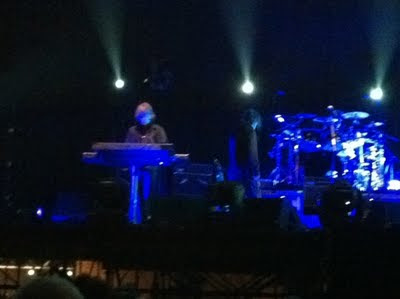 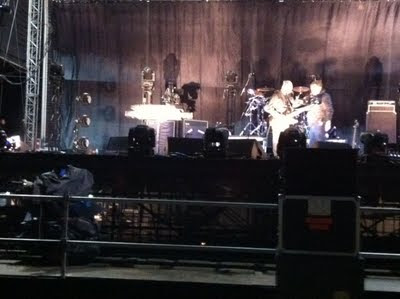 From SkyArts: "Hi, yes, The Cure's performance will be shown on tonight's highlights" 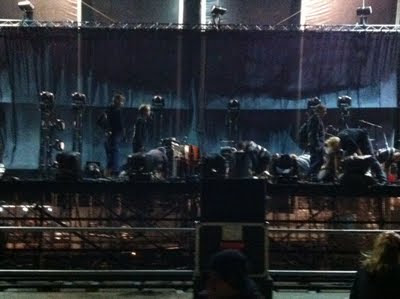 From Perfect.Murder: "Stage is being cleared after excellent PJ Harvey...we're getting excited." 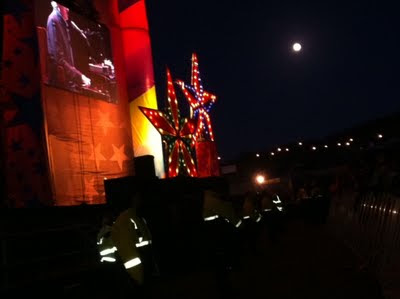 Olivier says Robert didn't join Crystal Castles for 'Not in Love'. Chris says Robert was watching them from the side of the stage. 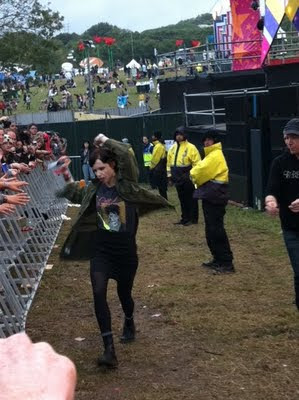 Alice from Crystal Castles. (Thanks Perfect.Murder)

From Olivier on his Reflections Wight Facebook page: "All Cure T-shirts are already sold out (except for the girly pink one :-)" 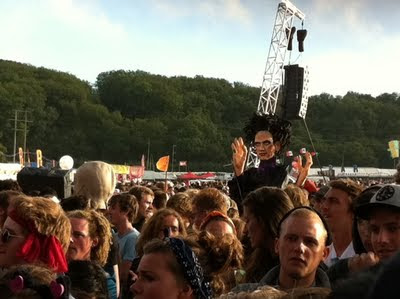 Robert puppet in the crowd. (Thanks Perfect.Murder)

New Cure buttons/badges being sold at Bestival. (Thanks Heron) 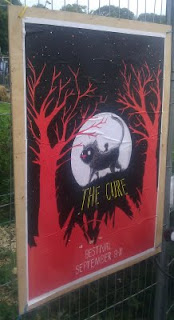 Photo of the Cure Bestival poster (Thanks Heron), of which there are only 100, and only available from Screenadelica poster shop located between the Magic Meadow and Tomorrow's World fields.

From Warren on Twitter: "Sophie Barker did a cover of 'A Forest' in the Psychedelic Worm tent to 150 people. "Find the boy if you can" ;o) " 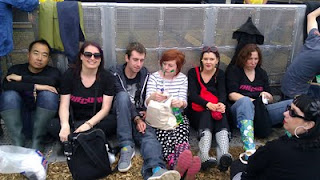 Fans are already waiting at the rail for tonight's show. Thanks to April for the photo.