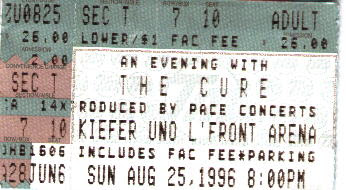 Setlist: Want, Club America, Fascination St., Lullaby, Strange Attraction, This is a Lie, Just Like Heaven, Jupiter Crash, Round & Round & Round, Lovesong, Mint Car, Catch, The Drowning Man, The Kiss, Charlotte Sometimes, If Only Tonight We Could Sleep, Dressing Up, Return, Treasure, Trap, Prayers for Rain, Inbetween Days, From the Edge of the Deep Green Sea, Bare, Disintegration

1st Encore: The 13th, Hot Hot Hot, Let's Go to Bed, Why Can't I Be You (That Old Black Magic/Young at Heart/Moon River("Old Man River")/Lovecats)

Robert: "There's like a whole glut of songs we haven't played in years. Apparently 'cause we're in New Orleans, and it's a dark kind of city. I will see if that's true again later. This is called If Only Tonight We Could Sleep"

Trent Reznor, Marilyn Manson, and Clint Mansell were at the show. 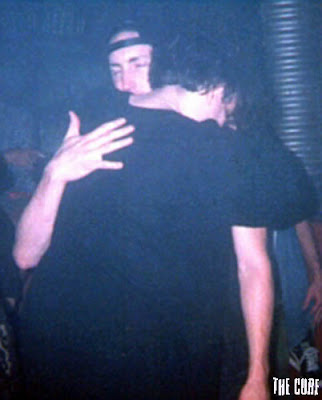 After the show, the infamous Trent & Robert brohug happened at The Blue Crystal. Alternative Press has the story:

""Every city in America has at least one Gothic club. In New Orleans, it's the Blue Crystal. When a band like the Cure is in town, the Blue Crystal throws a party after the show. The club called Reznor, the closest thing they have to a local dignitary, to invite him to the Cure after-show party. Further conversation revealed that the only way the Cure would show is if Reznor is there, too. You can't hear it anywhere in Nine Inch Nails, but Reznor is a Cure fan from way back. He considers the Cure's The Head On The Door" one of the best records ever." His favorite description of himself: "Robert Smith with a head cold."

Sorry, there's really no point to this post. Just traveling down memory lane a bit, before this week's shows.  Kinda excited. :)
Posted by Craig at 8:51 AM