Off to tour the universe...

Update 4: So here are our photos from Red Rocks, Dallas, and Houston/The Woodlands. And our videos of Jezebel, Home, and Somebody (all at Red Rocks), Judas (in Dallas), and Little Soul and Question of Lust (in Houston/The Woodlands). Thanks so much to everyone who wished us well. We truly appreciated it. Now back to Cure boredom. : ) We need a Cure world tour asap. : )

Update 3: Hard to really judge Houston, as V and I were a bit further back and to the side for this one, so I'm not sure if we were just spoiled by our previous seats, or if this show was just a bit less energetic. The band seemed a bit less into it than in Dallas and Red Rocks, and Dave & Martin didn't interact quite as much, but it was still a great show, and we got two of the Martin songs that we had missed up until now (Little Soul and Question of Lust, but still missed out on Shake The Disease). So overall, we had fun, but after the incredible Dallas show, this was a slight let down. So now our tour is over, and just as with Cure tours, we were thinking about how to squeeze in a few more shows. Doesn't look like it will happen, though. At least not in the US. : )
Thank you again, V. You're the most wonderful girl in this universe. I love you so much.

Update 2: Damn! Dallas was an awesome crowd! And DM were on fire. I think this show might have been even better than Red Rocks. Once again, V and I had amazing seats - 4th row, dead center. And Martin did Judas for the first time on the entire tour, and screwed up the intro and had to start it over. : ) I really am blown away by how good these shows have been, and how much more of a band they seem to be these days. The interaction between Martin and Dave is priceless. And if you're going to one of the upcoming shows, pay attention to Fletch. He's got some "incredible" moves on this tour, including eating on stage during songs. : ) And Peter, Bjorn and John are very good, too. Anyway, just having an incredible time with V and DM. Does this really have to end? "Always have to go back to real lives, where we belong." 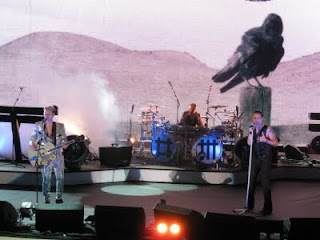 Update: The Red Rocks show was fantastic! DM put on a brilliant show, so much better than the last time I saw them, which was in 2001. V and I had a great time, and had excellent seats - 4th row, dead center! I still can't believe I've finally been to a concert at Red Rocks, which is the most beautiful venue I've ever seen. Thank you, V, for making dreams come true! : ) You rock even more than Martin. ; )
Photos and Videos - Jezebel / Home / Somebody
Posted by Craig at 12:33 PM 61 comments

Cure replacing the Beasties? No

Update: Not that there was a realistic chance of them replacing them, but now it's official. The Yeah Yeah Yeahs have filled the spot. (Thanks V)

Original story: The Decider lists The Cure amongst possible replacements for the Beastie Boys at the Austin City Limits festival. Just pure speculation, and very unlikely. (Thanks Monghi)

But just for fun, you can go here (picture #21) and vote for The Cure to be the replacement.
Posted by Craig at 9:47 PM 15 comments