From Riot Fest on Facebook: "Due to circumstances beyond our control and despite lots of support for Riot Fest & Sideshow in Byers, May Farms is no longer available to host Riot Fest. A nearby alternate location will be announced early next week. We know this sucks, we're as disappointed as you are, but if you could be a little patient with us, we'll have more information ASAP. All tickets will be honored at the new location. Riot Fest in Denver is NOT cancelled, the show will go on, and rock n roll never dies."

"We have a backup up plan, just need to take care of a few things. We are literally on the way to the airport to head to Denver right now."

"Dates will be the same."

Update (07/12/14): The rumor going around, and it seems to be based solely on info posted by Bandsintown, has them moving to Boulder. This is NOT confirmed and you should not alter your plans at all until Riot Fest makes their official announcement.

As Riot Fest says, "You saw some info about Riot Fest on an app? An app that we have nothing to do with? Yeah, I would totally trust that." So, yeah, I don't think it's going to Boulder.
Posted by Craig at 12:35 PM 5 comments

Okay, forget the festival. How about a solo show at Red Rocks? Or even invite some of the other bands to play a mini Curiosa Festival?

The curtain officially closed Friday on the Riot Fest show in Byers, with Arapahoe County announcing that it will not issue a temporary-use permit for the three-day music extravaganza.

Riot Fest, which features well known rock and punk acts such as Primus, The Cure, Wu-Tang Clan and Slayer, was scheduled for Sept. 19-21 at May Farms in Byers. It made its first appearance in the state last year, also at May Farms.

The festival was expected to attract 17,000 people a day to Byers, a town of just over 1,000 residents located about 40 miles east of Denver.

It's not clear how organizers of the festival will deal with the thousands of fans who have purchased tickets to Riot Fest or whether they will try to find an alternate location in the state.

Organizers had been awaiting word on a special use permit from Arapahoe County after a public hearing on July 1 where residents voiced concerns about the three-day music festival — primarily revolving around noise, traffic and drug use.

"The decision to deny is based upon traffic impacts and public safety concerns that would adversely impact surrounding property owners," stated a release posted on the county's website Friday.

Riot Fest organizer Max Wagner told The Denver Post in June that he was "confident that we're going to get to a place where the commissioners, the local community leaders are happy."

The first was the temporary-use permit. The commissioners also are mulling whether to grant a use by special review amendment, allowing May Farms to expand its agritainment operations to an additional 195 acres north of Interstate 70 to accommodate large events like Riot Fest.

Riot Fest has two other shows scheduled to take place — in Chicago and Toronto during the two weekends leading up to the Colorado dates. (Thanks @slicingeyeballs)

A Reeves and Jason jam today?


That's great! Now how about "jamming" with Robert, Simon, and Roger, and creating some new Cure songs? Or is hoping we might one day hear new Cure material the dream of mad men/women? :)
Posted by Craig at 2:58 PM 11 comments 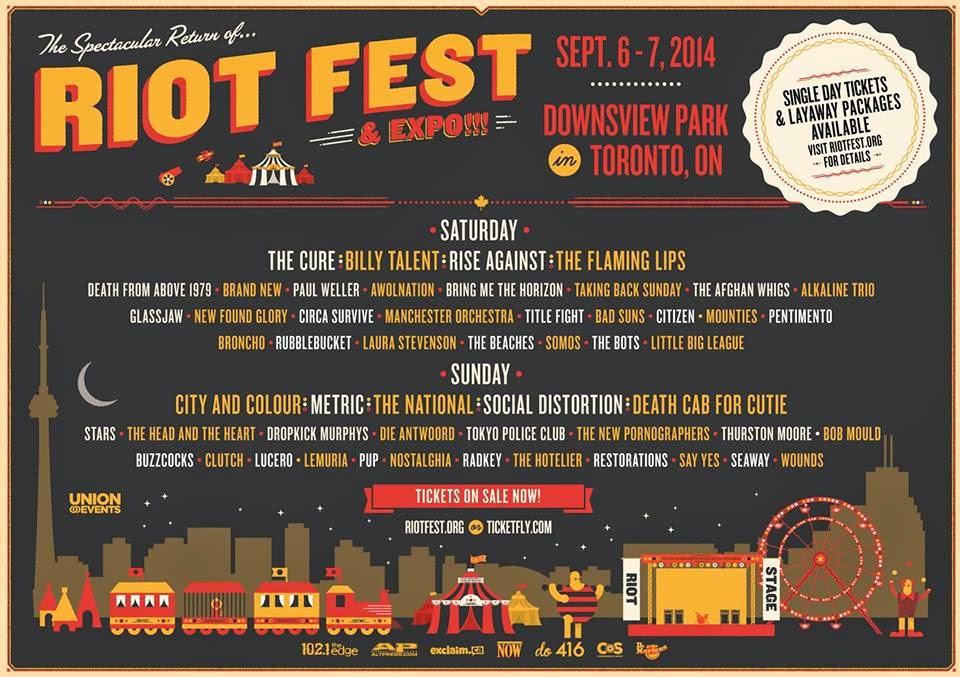 Riot Fest will be posting the daily schedule for Toronto this morning, July 9th, at 8 AM eastern. Single day passes will also go on sale at that time.

Glasgow 1984 on Dutch TV this week

The Cure - Live at The Barrowland Ballroom, Glasgow, 1984

The Dutch public broadcasting channel NPO Cultura will be broadcasting The Barrowland Ballroom, Glasgow, 1984 concert over the coming week.

A legendary concert, recorded in 1984, from one of the defining groups of the 80’s: The Cure.
Recorded at The Barrowland Ballroom, Glasgow, Scotland in 1984. The band plays, amongst others, the hits ‘Primary’, The Caterpillar’ and – naturally – an extended version of the massive Top 2000 hit ‘A Forest’. This concert has never before been broadcast in its entirety on Dutch television.