Kazuko, Junko, and the Cure fan 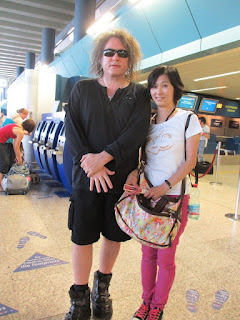 "I attended the Heineken Jammin’ (Milan) and Rock in Roma (Rome) in Italy with my friends. I enjoyed the shows very much! At Heineken Jammin’, before the show, so many photographers were interested in my FAN that I made. They took my photo with my Cure FAN! I was in these videos (1 - 2) with the FAN!"

I met Robert at Fiumicino Airport in Rome! He wrote his autograph on my fan! And I took a photo with him!!!"
More photos here. (Thanks Kazuko) 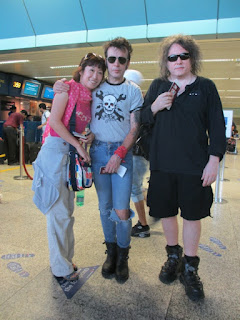 Update: "When Kazuko met Robert and Simon at Fiumicino Airport, I was there, too. We went to Heineken Jammin' Festival and Rock in Roma together.
It was 20 minutes before our boarding time and we were walking down toward the security checkpoint when I noticed the band's bodyguard and Simon passed by. I suddenly turned about and asked Simon if there would be time to take some pictures. He said there would be after they finish check-in. As he promised, both Robert and Simon kindly took some time to be in some pictures with us although they didn't have much time before getting on board.
It was my third encounter with the band - twice in Sydney last year after the Reflections show and at the airport- but I'd never got so close to Simon like this. I felt like I was in a sweet dream." Photo of Junko & Robert here. (Thanks Junko)
Posted by Craig at 10:02 AM