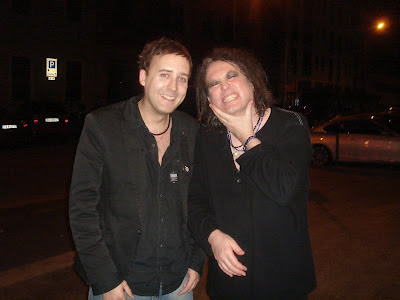 "My friend and I met the band in Milan as we were staying in the same hotel, Roger, Jason and Simon arrived back after the concert around 1.30 with Robert around 3 hours later.
In the picture with Robert I joked with him "Can you smile in this photo please as the one I had with you 10 years ago you looked miserable in it" so he did this great exaggerated smile, then a miserable face again!!!" More photos with the band here.
(Thank Tom (Cureboy) & Katerina) 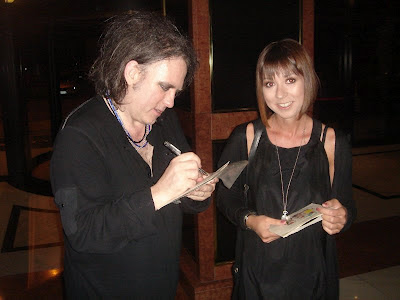 Update: "Sending you just a few more pics from Milan with Robert! Despite the lateness of the hour he was so polite and talkative..simply adorable!

He signed some 7 inches i had with me..we chatted a bit and then he went up to his room :)

luv luv luv the 'IF ONLY' comment right next to 'happy the man'!" (Thanks Katerina)
Posted by Craig at 8:25 AM