"We thought this was some sort of scam" 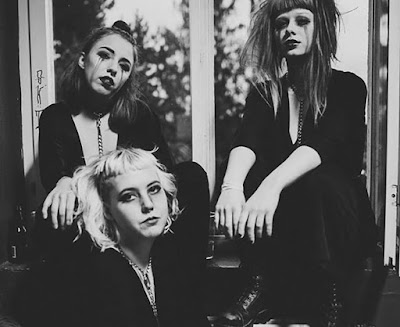 "We thought this was some sort of scam," says Sólveig Matthildur Kristjánsdóttir, one of the three members of Icelandic darkwave band Kælan mikla. They received an email with a personal letter from Robert Smith, singer, guitarist and songwriter of The Cure asking them whether they could perform at the upcoming Meltdown Festival in London. The festival is at the South Bank Centre between June 15- 24. Smith is curating the festival this year.

"I have no idea how he found us, and I read it and thought it was a scam email. I thought it was really funny. But I sent it to our booker who told me that it was a real letter. I'm still in shock. All three of us have a varied taste in music but we are all Cure fans. The band has been a huge influence on us. Faith is one of my all-time favourite records," she explains.

The Cure were formed in the late seventies and have released thirteen studio records and have been a great influence on goth/ darkwave and synth music. They also received commercial popularity with songs such as Just Like Heaven, Lovesong and Love Cats.

Kælan Mikla, formed five years ago in Iceland by three young women, Sólveig Matthildur, Laufey Soffía and Margrét Rósa have received critical acclaim both in Iceland and abroad for their synth-punk darkwave music. This past winter they've been touring Europe and in April they are playing at the Roadburn Festival in the Netherlands. Later this year they're going on a South America tour and they are also working on a new studio album.

Kælan Mikla accepted Smith's offer of course, and will be opening for Placebo at the Meltdown Festival. Amongst the other bands playing at the festival are My Bloody Valentine, Nine Inch Nails, Loop, The KVB, The Soft Moon, Moon Duo, Suzanne Vega, Low, Death Cab for Cutie, Manic Street Preachers and Mogwai. Icelandic/Faroese duo Kiasomos will also play as well as Jónsi from Sigur Rós accompanied by Alex Somers and Paul Conley.

Tickets to Meltdown Festival go on sale on April 13th.
Posted by Craig at 2:53 PM