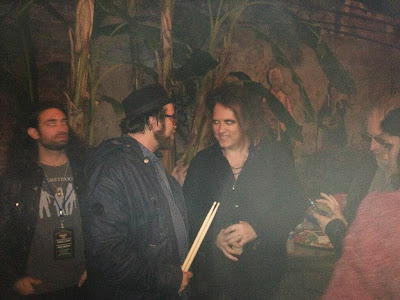 Update (Nov. 7th, 2013): Posted today by Preservation Hall - "There was one unexpected treat during the final Deja Voodoo performance, as a white tour van pulled up to Preservation Hall with the members of The Cure pouring out of the Ford doors. Robert Smith and company stayed until the wee hours of the morning, enjoying the music and spirits of the Hall. The Preservation Hall Family still have smiles on their faces from that night."

From Facebook: "@beatsantique & @preshallband really turned it out last night - fantastic to see The Cure there enjoying the performances as much as we did!"

From @drielycarter: "Holy Fuck I just stumbled upon Robert Smith from The Cure at the Preservation Hall tonight and I nearly had a heart attack! http://instagram.com/p/gSSTK-kYJg/# " (Thanks @heavenmalone)

Update: Here's an article from Nola.com. And I got an answer about whether The Cure actually played with them.


@CraigatCoF They were just at the Hall to enjoy the music and have a beverage or two :) Stay posted on the photos
— Preservation Hall (@PresHall) November 5, 2013