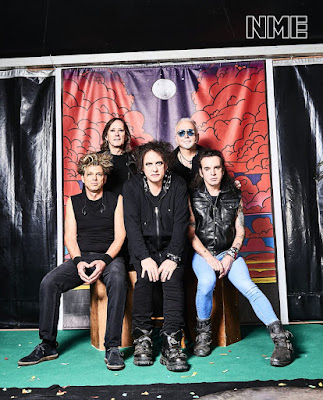 Read the whole thing at NME, but here's the part talking about the new album:

Tim Pope started teasing his new film about The Cure last year, by saying he was working on a special anniversary film containing archive footage alongside the band’s story narrated by Robert Smith. After they found that the format didn’t hold together, they decided to just focus on the London gig. The original idea has not been totally shelved, but won’t be revisited just yet.

“I hate people who write their autobiographies when they’re still alive,” says Smith. “I’d prefer it for them to write it when they’re dead! You know what I mean. They do one, then they go, ‘Here’s my autobiography part two’. I’m not going to do a history of The Cure from my perspective when we’re still going to do something new. What’s the point?”

The “something new” he’s talking about is, excitingly, an album. It’s been over a decade since new music from The Cure, but the wait should be over by the end of 2019. The act of searching for younger talent to play at his Meltdown residency last year left Smith “enthused by their enthusiasm” and it pushed him to create something new. And the band have been working on a huge batch of new songs. While 2008’s acclaimed ‘4:13 Dream’ and its self-titled 2004 predecessor felt very much like a stab at ‘classic Cure’, this new 14th album will see the band push down on the bruise that inspired their morbid ‘80s masterpieces ‘Pornography’ and ‘Disintegration’.

Smith once said he wanted the claustrophobic nihilism of ‘Pornography’ to sound and feel“virtually unbearable”, and it laid down the black runway for the likes of Nine Inch Nails, Marilyn Manson, Placebo, Deftones, Muse and, arguably, Billie Eilish. It seems only right that The Cure should return to the shadowlands they opened up for so many. So when will the new album be ready?

“It’s changing. It is a work in progress,” says Smith. “We did three weeks in Rockfield Studios in Wales in the early part of the year to try and capture some genuine Welsh doom and gloom. It was sunny the entire time though, which was pretty disappointing. It only rained once in three weeks, which I think is a national record for Wales.”
Which version of the The Cure are we likely to hear on the record?

“We did about 17 songs and almost all of them were really downbeat and heavy. There were a handful of others, and I really shouldn’t say this because you’ll go ‘oh no’, but in my head I wanted to do two albums – one after another. One was gonna be upbeat and the other downbeat, but the upbeat one I’m not so sure about now.”
So you’ve settled on the idea of something quite miserable now?

“Although the concept of what it’s going to be hasn’t really changed, I may have to change some bits of it. It’s kind of pushed me back a little bit because I thought I’d be in the mixing stage by the time we’d finished the festivals, but in fact we’re going to go back and re-record about three or four songs around the time we go and play Glasgow in August. I feel intent on it being a 2019 release and would be extremely bitter if it isn’t. At some point I will have to say ‘this is it’, otherwise we’ll just keep recording like we have done in the past. It never gets any better. We’re due one more session then we’re done.”

It’s been 11 years since you released ‘4:13 Dream’. Do you feel like a different person now?

“I don’t think I’ve ever changed much particularly. The core of who I am remains the same. Just like everyone, I have good days and bad days. I think I’m generally more of a balanced individual than I was 10 years ago. I’ve experienced more of life’s darker side, for real.”
What impact has that had on the new songs?

“Before I used to write about stuff that I thought I understood. Now I know I understand it. The lyrics I’ve been writing for this album, for me personally, are more true. They’re more honest. That’s probably why the album itself is a little bit more doom and gloom. I feel I want to do something that expresses the darker side of what I’ve experienced over the last few years – but in a way that will engage people. Some of the albums like ‘Pornography’ and ‘Disintegration’ are kind of relentless. I levelled ‘Disintegration’ with some songs like ‘Lullaby’ and ‘Lovesong’, but I think this one is more like ‘Pornography’ because it hasn’t got any of those songs that lighten the mood at all.”
So you’re not looking for ‘a hit’?

“When it’s closer to its finished form, it’s all about whether I think it’s too much or whether we just go with it. If it does turn out like that I think it’s going to alienate any kind of pop audience we still have. I think fans for a certain type of music that The Cure make will love it. That’s the dichotomy of the paradox: they will love the fact that it’s merciless.”
Merciless and very, very long?

“I know eight songs that currently make up the album. In the band, there’s a certain discussion going on but I obviously realise that the option is to do another album. Roger thinks that this is the last album but I think that every album we do is the last Cure album. It may well be, but if there’s another bunch of good songs then there’s no reason not to follow it up. What do we do if we’ve got seven good songs leftover? Wherever it ends up, it will be an honest decision. There’s no record company involvement. It’s just us doing it. No one is pulling the strings.”
Posted by Craig at 1:46 PM